A new startup offering free pick-ups and drop-offs in the Rosslyn-Ballston corridor in its electric cars has gotten quite a bit of attention just weeks after launch.

Sprynt can be downloaded for iOS and works similarly to other ride-hailing apps like Uber and Lyft. Users enter their current location, destination and the number of passengers, then request a ride. They are then told their driver’s name and an estimated time of arrival.

“I came up with something that was a short, quick hop in between point A and point B,” said Alex Villanueva, the 26-year-old founder, about the company’s name.

Sprynt launched on June 21 and currently has four cars, with a fifth on the way. Within five days, the app had over 700 downloads.

“In order for the concept to work you need a special area where it’s densely populated and people all live, work and play within a couple of square miles,” Villanueva said. 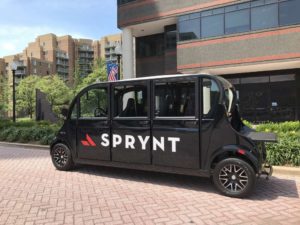 Villanueva does not view his service as having competitors because he believes Sprynt complements the existing methods of transportation.

“It’s a too far to walk but too close to drive little niche, where you still need perhaps Uber or Lyft, or the Metro or the bus, to get anywhere else outside of our service area, ” Villanueva said.

He explained people may want to take his service if it’s a hot, cold or rainy day, if they don’t feel like walking or if they want to drink wherever they are going. Some of Sprynt’s customers are already regulars and use the service to commute.

“It’s really meant to be this gimmick-free [service],” said Villanueva. “I’ve been telling riders, ‘When I drop you off my goal is for you to feel it’s too good to be true.'”

The business is able to provide free rides thanks to its advertisers. Villanueva said that the likes of Don Tito, Tupelo Honey Café, Ten at Clarendon and Miriam’s Kitchen have already partnered with Sprynt.

“By sponsoring the service and by advertising through our advertising platforms, these companies are able to build goodwill while at the same time still promoting the products and services they were going to anyway,” Villanueva said.

There are three different ways businesses can advertise. The first option is to promote their companies on the two 12.9-inch interactive iPads placed in the cars. A restaurant might put its menu on the i-Pad or a company might include a job posting.

The iPad option is the cheapest option because people can only see the ads if they are physically inside the cars, interacting with the devices. Villanueva said he hopes to increase activity on the iPads by creating a Photo Booth feature.

“[This is a] way to make sure that the advertising is not a distraction from the rider’s experience but rather, is a part of it,” Villanueva said.

A second way to advertise with Sprynt is via exterior vehicle wraps. That platform is the most expensive option because the ads are visible to whomever the cars pass. 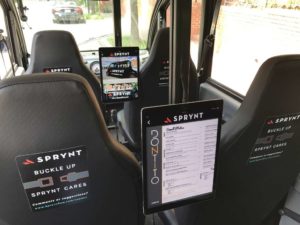 The third option for advertisements will arrive with Sprynt’s new update in the near future. The app will have a featured pin that users can click on to have access to a plethora of deals. A restaurant may promote a happy hour and customers can set that place as their destination for the ride.

“The ultimate goal for this is to be a decision-making tool for customers,” Villanueva said. “When people are considering doing some activity, I want them to check out this place.”

Villanueva hopes to eventually increase Sprynt’s coverage area to Old Town Alexandria and as a connector between Rosslyn and Georgetown. He said he may also create a safe ride program for university students.

“We have this rare scenario where everybody truly does win and there’re no strings attached,” Villanueva said. “It’s a safe way to get around, it reduces drunk driving and puts money back in your pocket…The advertisers win because this is an interactive way to reach riders. And again, the most important thing is the association with this free, eco-friendly ride service.”