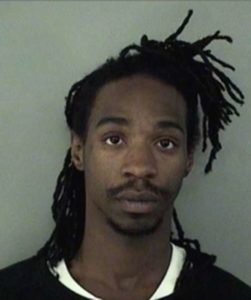 A D.C. man is facing charges for being in a group that rode dozens of dirt bikes and ATVs through Arlington in April.

Stephon Williams, 24, has been charged with felony eluding, concealing identity while wearing a mask, reckless driving and operating an ATV on the highway. He is being held in the Arlington County Detention Facility without bond.

Williams was allegedly part of a group of about 75 riders that on April 9 around 7 p.m. drove on Arlington Blvd, then to U.S. Route 1 south into Alexandria. It was one of two such incidents of the riders descending on the county that weekend; another incident was reported last month.

An Arlington County police officer monitored the group in Courthouse on his in-car camera, and detectives were able to put together a description of a suspect. Williams was arrested in D.C. and waived extradition to the Commonwealth.

The Arlington County Police Department has arrested and charged a suspect for his involvement in an April 9, 2017 incident of dirt bikes and all-terrain vehicles (ATVs) being operated in Arlington County. Stephon Williams, 24, of Washington D.C. has been charged with felony eluding, concealing identity while wearing a mask, reckless driving, and operating an ATV on the highway. He is being held in the Arlington County Detention Facility on no bond.

On April 9, 2017 at approximately 7:14 p.m. an officer conducting a traffic stop in the 1200 block of N. Courthouse Road observed a large group of dirt bikes and ATVs traveling westbound on Arlington Boulevard. The officer activated his in-car camera system and monitored the group before they exited Arlington County.

After reviewing evidence from the scene, detectives from Arlington County Police Department’s Auto Theft Unit developed a suspect description. The suspect was arrested in Washington D.C. and waived extradition to the Commonwealth.

Dirt bikes and ATVs pose a danger to pedestrians and other motorists and are illegal to operate on area roadways. If you see or know the identity of someone riding a dirt bike or ATV recklessly in Arlington County, call police at 703-558-2222. In the case of an emergency, call 9-1-1. To report information anonymously, contact the Arlington County Crime Solvers at 866.411.TIPS (8477).