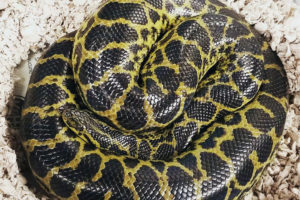 Arlingtonians will be able to own non-venomous snakes regardless of size under the latest version of the proposed “wild and exotic” pets ban.

In the new text, there are no prohibitions on owning non-venomous snakes, a change from the previous iteration in March, which said that owners are limited to snakes that weigh 10 pounds or less.

County staff said they made that change, having also previously discussed to ban non-venomous snakes that measured more than 4 feet in length, after further community input and putting together regulations on enclosure, care and handling with residents, animal control officials and veterinarians.

Each snake must have a microchip and have an enclosure that prevents escape but allows freedom of movement within it. There are also stringent rules for any non-venomous snake weighing more than 25 pounds, while constricting snakes are still banned.

Elsewhere in the proposal, hedgehogs and gliders are allowed, while an ambiguity is removed as previous language could have suggested that owning birds or fish as companion animals was not allowed. Ownership of flightless birds like ostriches and emus is still specifically prohibited.

And those wishing to own harmless spiders, scorpions and centipedes are free to do so after more language tweaks, while prohibiting ownership of those that are, as staff put it “harmful and therefore unsuitable in Arlington homes.”

Certain county agencies would now be excluded, if they are using the wild and exotic animals for educational purposes, or for rescue or animal welfare. Arlington Public Schools, for example, would be able to operate an animal program, while zoological animal exhibitions accredited by the Association of Zoos and Aquariums are allowed too.

As proposed, the updated ordinance calls for fines of up to $250 a day for violations.

Staff noted that some members of the community said that circuses should not be allowed in the county, but they said that Arlington does not have the legal authority to ban such performances.

The Arlington County Board is set to vote Saturday on whether to advertise a public hearing on the proposed ban, which would be held in September.