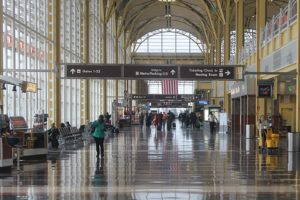 The Crystal City Business Improvement District announced today (Monday) it is looking to study the feasibility of a new pedestrian link between Crystal City and Reagan National Airport.

In collaboration with other stakeholders in the neighborhood, the BID issued a Request for Proposals asking for consultants to study a possible connection.

Respondents will need to study optimal alignments, private and public real estate considerations, regulatory requirements, costs and financing and implementation, including the necessary agency and stakeholder approvals that would be required. Proposals are due August 4.

“Crystal City is the area’s most accessible neighborhood – with Metro, [Virginia Railway Express], connections to every major area highway, bike paths and an airport you can literally walk to,” said Angela Fox, Crystal City BID president and CEO, in a statement. “A new pedestrian connection will bring the airport even closer, from a 15-minute walk to a four-minute walk and transform the area into a unique multimodal transportation hub serving as a major economic development catalyst for Crystal City, Arlington County and the Commonwealth.”

In their announcement of the RFP, BID officials said the new pedestrian crossing would help leverage various upcoming enhancements to Crystal City’s transportation infrastructure, including the revamped VRE station and a proposed new Metro station entrance on Crystal Drive. Reagan National is also set for a $1 billion refresh, with construction there expected to conclude in 2021.