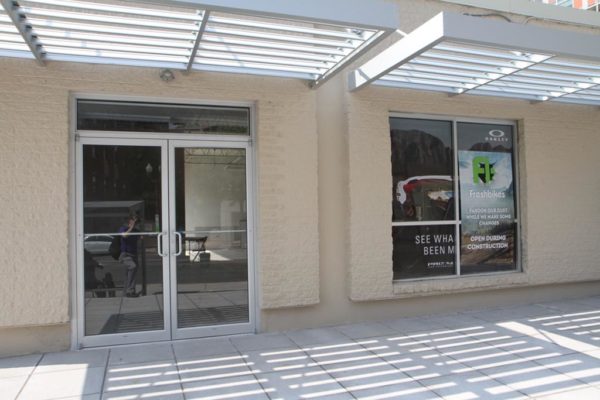 The new fast-casual pizzeria &pizza is aiming to open in the late fall in Ballston, its first shop outside a mall or airport in Virginia.

The build-your-own-pizza restaurant will move into 3924 Wilson Blvd, next to Freshbikes near the intersection with N. Quincy Street. It will occupy more than 2,000 square feet of space in the building, facing Wilson Blvd and across the parking lot from Gold’s Gym.

“We pride ourselves in creating neighborhood shops built for the neighborhood and supporting local, like-minded brands doing big things – whether that’s in downtown D.C. or Arlington,” said Michael Lastoria, co-founder and CEO of &pizza, in a statement. “We are so grateful to have grown this quickly, and directly attribute our growth to the DMV community’s support over the last five years.”

More from an &pizza press release:

&pizza, the beloved Washington, D.C.-based pizza brand, announces a new shop opening in Virginia this fall. The anti-establishment establishment will soon be serving up its signature oblong pies in the Ballston section of Arlington at 3924 Wilson Boulevard.

Occupying 2,123 square feet, Ballston will be &pizza’s sixth shop in Virginia. Other Virginia locations include a Tysons Corner shop slated for opening in October, Springfield Mall and multiple airport locations at both Dulles and Reagan. The first standalone shop in Virginia outside of mall or airport, the Ballston location will deliver the full &pizza experience in a way suburban Virginia has never seen before.

Each of &pizza’s outposts celebrates oneness, unity, and inclusion. “We pride ourselves in creating neighborhood shops built for the neighborhood and supporting local, like-minded brands doing big things – whether that’s in downtown D.C. or Arlington,” said Michael Lastoria, co-founder and CEO of &pizza. “We are so grateful to have grown this quickly, and directly attribute our growth to the DMV community’s support over the last five years.”

&pizza has made their critically-acclaimed pies, unlimited toppings and commitment to community the new type of pizza shop.  They have successful track-records in both urban and suburban communities, choosing to always focus on creative food, hyper-local design and charitabe giving. With shops in Adams Morgan, Tysons Corner and New York City’s Astor Place also slotted to open this fall, &pizza continues its trek as one of the fastest-growing pizza brands on the East Coast.

&pizza has also signed a lease at 401 Morse Street NE slated for a 2018 opening. More information to follow.

&pizza prides itself on serving up experiences in addition to fresh pizza. Guests have the opportunity to craft their own individual pie with unlimited ingredients or choose from eight signature pizzas with bold and unique flavor combinations such as the Maverick (meat lovers), the egg-topped Farmer’s Daughter (breakfast with a kick), and the Gnarlic (more than a white pie). The brand works with Little Giants (local producers) to create innovative menu offerings that span a variety of food and beverage categories, including craft &SODA and small batch &TEA. &pizza is all about cleaner labels – using local produce and no high fructose corn syrup or artificial flavors. They also have a variety of gluten-free, vegetarian and vegan offerings.

Founded in 2012 in Washington, D.C.’s historic H Street NE corridor, &pizza set out to create a different kind of pizza shop – one where experience is the focal point, and every shop reflects the culture and people of its neighborhood. &pizza quickly became a part of the fabric of its local D.C. communities with its strong sense of social mission as a champion fighter in the battle for a living wage for its tribe, local food partnerships as a way to create a twist on classics, and in turn, with the signature ampersand tattoos that are now proudly worn by nearly 100 guests and members of its devoted Tribe of employees.

Evidence of their disruptive success can be found in the organizational culture of its employees, its rapid expansion and numerous recognitions. The brand was recently named Business Insider’s “Most Popular Pizza Chain” in Washington, D.C. and took home wins in 7 different “Best Of” categories by Washington City Paper – including “Best Pizza.” With the opening of &pizza in New York’s NoMad neighborhood in June 2017, Buzzfeed declared that “The Next Generation of Pizza Is Descending Upon New York.”