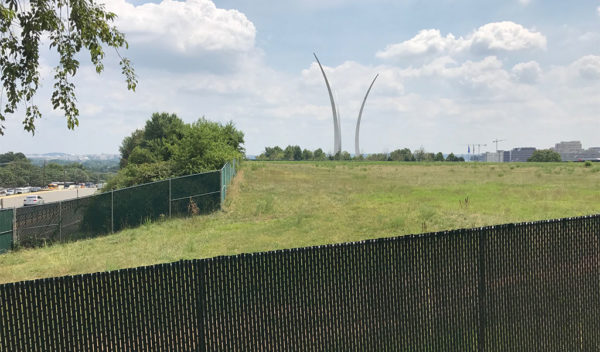 Man Struck By Car Near Ballston Metro — A man was struck by a vehicle on Fairfax Drive near the Ballston Metro station yesterday. The incident happened between 5-5:30 p.m. Numerous witnesses immediately called 911 or rushed to the man’s aid. His injuries were reported to be not life threatening. [Twitter, Twitter]

Driverless Car Research Is Legal in Va. — Virginia law does not explicitly ban the kind of “driverless” car research conducted by Virginia Tech on the streets of Clarendon and Courthouse. While the Virginia Tech van was driven by a man in a seat costume, it is also legal to test legitimately self-driving cars in the Commonwealth. [NBC Washington]

Video: Weekend Apartment Fire — The Arlington County Fire Department has posted video of the apartment fire on Columbia Pike over the weekend. A 27-year-old man was arrested and now faces numerous charges in connection with the blaze. [Facebook]

Courthouse-Based Nonprofit Up For National Award – The Organization for Autism Research is one of 15 finalists in the country for a $50,000 prize that recognizes “innovative ideas for engaging people over 50 in improving the lives of vulnerable children and youth.” OAR, based in Courthouse, launched its Hire Autism initiative earlier this year, an online portal to connect adults with autism seeking work and potential employers. Online voting is open through August 31. [Hire Autism]

Nearby: McLean Residents Want New Potomac Span — Civic leaders in McLean are pressuring officials to expedite a new American Legion Bridge span across the Potomac River. The existing bridge is clogged with Beltway traffic, sending congestion onto local streets, residents say. There is an existing proposal to extend Beltway High Occupancy Toll lanes between the Legion bridge and the I-270 spur in Maryland. [InsideNova]