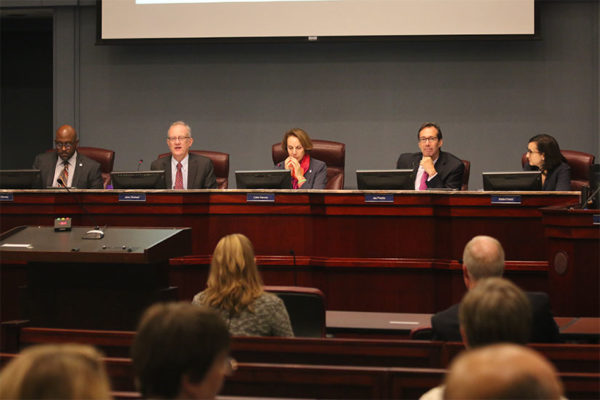 (Updated at 5:35 p.m.) Arlington is thinking about renaming two state highways named after Confederate leaders, but needs authorization from the state legislature to do so, according to a statement released by the Arlington County Board late Thursday afternoon.

In the statement, County Board Chair Jay Fisette says the county is “united against racism and bigotry” in the wake of the events in Charlottesville this past weekend.

“Arlington rejects the hateful speech and actions of the KKK, white supremacists, neo-Nazis and the alt-right movement,” the statement says. “We will not allow a resurgent hate movement that distorts history and threatens our future to take us backward.”

The statement goes on to say that the county is seeking legislative authority to rename Jefferson Davis Highway (Route 1) and Lee Highway.

“Arlington is committed to seeking the authority from the General Assembly to rename both Jefferson Davis and Lee highways within our boundaries,” said the statement. “Our legislative delegation is committed to putting legislation forward on Jefferson Davis Highway. Arlington believes that local governments should have the authority to name any roadways within our borders.”

Arlington’s ability to actually get the authority, however, is in serious doubt due to Republican majorities in both the House of Delegates and state Senate. Arlington has previously placed authority for renaming Jefferson Davis Highway on its list of legislative priorities, to no avail.

Fisette notes that the renaming of Washington-Lee High School is also under consideration, but falls under the jurisdiction of the School Board.

The tragedy that unfolded in Charlottesville, where three people lost their lives, has shaken the conscience of our community and of our nation.

The Arlington County Board condemns the act of domestic terrorism that cost Heather Heyer her life, and mourns her death and the deaths of the two Virginia State Police troopers, H. Jay Cullen and Berke M.M. Bates, who died in the line of duty. Our thoughts and prayers are with their families, and with the many who were injured that day.

As many yard signs across Arlington proclaim: “hate has no home here.”

It is appropriate, in the wake of the Charlottesville events, that our community and many others are reconsidering the public memorialization of Confederate leaders. This Board has received numerous letters from concerned residents pleading that these leaders of rebellion against the Union not be publicly memorialized – particularly noting Jefferson Davis Highway, Lee Highway and Washington-Lee High School.

Arlington is committed to seeking the authority from the General Assembly to rename both Jefferson Davis and Lee highways within our boundaries. Our legislative delegation is committed to putting legislation forward on Jefferson Davis Highway. Arlington believes that local governments should have the authority to name any roadways within our borders.

Because it is a city, neighboring Alexandria controls all roadways within its borders. The City Council voted in September 2016 to rename its stretch of Jefferson Davis Highway, and graciously included two Arlington residents in the advisory panel it formed to seek suggestions from the public for a new name. That panel will make a recommendation this fall, and the Alexandria City Council will act.

Finally, the name of Washington-Lee High School and all other public schools in Arlington falls under the authority of the School Board. We know that the School Board will be speaking to this issue in the near future.

Although this is a painful time for us all, ultimately, Arlington’s story is an inspiring one of racial and social progress, of moving forward and overcoming the deep wounds inflicted by slavery, the Civil War, Jim Crow and the legacy of  segregation. Our past can never be erased, but we can and will continue to learn from it.

Arlington today is a vibrant, diverse and inclusive community that treats each individual with respect and champions human and civil rights.

We will not allow a resurgent hate movement that distorts history and threatens our future to take us backward. Together, we will continue to strengthen the bonds that unite us.