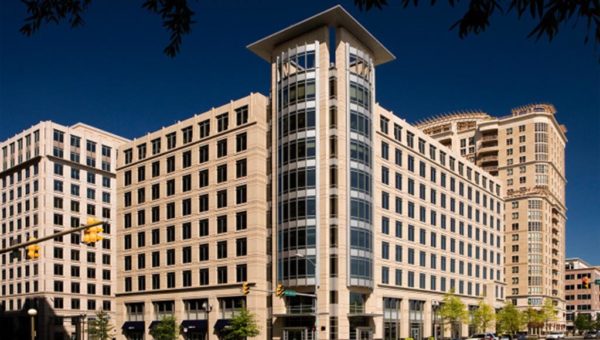 A new co-working space will move into Ballston next year, across the street from the under-construction Ballston Quarter mall.

TechSpace will move into the eighth floor of Two Liberty Center (4075 Wilson Blvd); its 10th location in the United States. It expects to open in June 2018. TechSpace already has similar co-working spaces in New York, California and Texas.

The new 20,000-square-foot Arlington office will include 56 private, interconnecting office suites with 198 workstations as well as open co-working desks and spaces for working. That will include fully-equipped conference rooms and lounges. Members who work in the space will also have access to building amenities like a rooftop terrace, bike storage, locker rooms and showers.

More from a TechSpace press release:

“TechSpace Arlington will allow us to expand our outstanding customer service and highly flexible, low-commitment model to many more companies seeking to grow their businesses without the burdens of long-term leases and unnecessary capital investment,” said Memenas.

TechSpace will complete with a number of existing coworking spaces in Arlington, including the soon-to-open Spaces in Rosslyn, MakeOffices in Clarendon and WeWork in Crystal City, among others. There is demand for coworking space in Arlington: latter two offices are both at or near capacity.