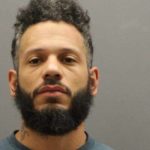 More details have emerged about the arrest of murder suspect Jason Allen Johnson.

Arlington County Police say Johnson — who is wanted for the fatal shooting of a 23-year-old man at a north Arlington house party in February — was arrested for shoplifting on the Upper West Side of Manhattan.

Johnson is being held in New York City, pending extradition to Virginia.

A suspect wanted for Murder in Arlington County has been arrested in New York City. At approximately 4:10 p.m. on October 24, Jason Allen Johnson was arrested in the 2700 block of Broadway in Manhattan for shoplifting. During the course of the investigation, it was determined that he was wanted for First Degree Murder and on a District of Columbia Superior Court Warrant for Failure to Appear on a Possession with Intent to Distribute a Controlled Substance – Cocaine charge. He is being held in New York City pending extradition to the Commonwealth.

At approximately 3:22 a.m. on February 19, 2017, Arlington County Police responded to the 6300 block of N. 29th Street for the report of shots fired. Arriving officers located one male victim suffering from a gunshot wound and immediately began performing CPR. Arlington County Fire Department medics transported Michael Gray, 23, of Manassas, Virginia to Inova Fairfax Hospital where he succumbed to his injuries.

The initial investigation revealed that this shooting resulted from a dispute that took place during a party at a residence in the 6300 block of N. 29th Street. Following an intensive investigation including witness interviews and the review of crime scene evidence, charges were sought for Jason Allen Johnson, 38, of Washington D.C. Johnson subsequently fled the area and a long, exhaustive search was initiated by the United States Marshals Service and the Arlington County Police Department.