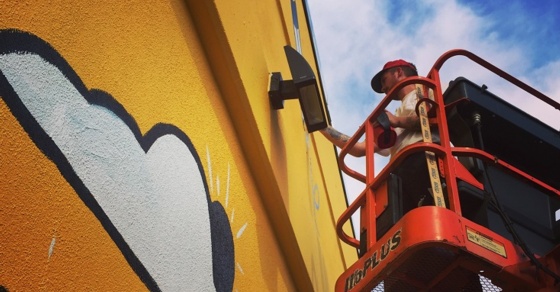 This is a column written and sponsored by Arlington Arts / Arlington Cultural Affairs, a division of Arlington Economic Development.

If you see stars and paper airplanes circling your head when you look up from your beer during the first annual Valley Fest Celebration, it’s not that you’ve had one too many. It’s a new Arlington Arts Mural by artist Ham Smith on the façade of 3700 S. Four Mile Run Drive, adjacent to the event.

The Mural is making its official debut on Sunday, November 5, 2017 during this new street festival in front of Shirlington’s New District Brewing Company, 2709 S. Oakland Street, in Arlington, Virginia.

With live music, food trucks and local art on display, admission to Valley Fest is Free (with tickets for sale for the beer tastings). The first 50 attendees who stop by the Arlington Arts booth between 2-4 p.m. will receive a free tee shirt based on themes from the Mural, signed by the Artist himself.

The home-base for Arlington artists and cultural groups ranging from WSC Avant Bard and Halau O ‘Aulani, to Jane Franklin Dance, the County-run 3700 venue is used for everything from workshops and rehearsals and a recording studio, to performances in the 80+ seat Theatre on the Run. The vibrant shapes and colors of the mural reflect the buzz of activity that occurs at the venue from morning till night.

If you miss getting your free Arlington Arts Mural Tee Shirt at Valley Fest, you can also purchase one at the new Made In Arlington pop-up retail market, a new showcase for the work of creative Arlington makers and artists. It’s located in The Plaza Shop on the 1st Floor lobby of 2100 Clarendon Boulevard (open M-F, 8-5 p.m.).