This sponsored column is by James Montana, Esq., the principal of Steelyard LLC, an immigration-focused law firm located in Arlington, Virginia. The legal information given here is general in nature. If you want legal advice, contact him for an appointment.

My clients and my friends want to know: What on earth is happening to Deferred Action for Childhood Arrivals (DACA)?

Here’s the state of play.

In 2012, President Obama promulgated DACA which, in effect, granted work permits and security to people who were brought to the United States as minors and met a laundry list of qualifications.

These young men and women came from all walks of life. I’ve won DACA relief for skilled carpenters, salesmen, a few graduates of very ritzy private schools and one especially memorable young man who overcame homelessness after winning DACA relief. Getting work permits was a big deal for all of them, and helping them out has been one of the most rewarding elements of my practice.

DACA was granted to individual applicants in two-year increments, beginning on whatever date United States Citizen and Immigration Services (USCIS) happened to approve the initial application. For this reason, approval dates (and renewal dates) were spread all over the calendar.

On September 5, 2017, President Trump issued a memorandum rescinding DACA. This memorandum had the following effects:

As of now, the unlucky folks who run out of DACA status will not be able to renew. That means that work permits can’t be renewed, and old deportation orders can, in theory, be put into effect.

The news isn’t all bad for DACA recipients. There are four major ongoing lawsuits challenging President Trump’s rescission of DACA in federal court. One or more of them might succeed, in one way or another: by halting the rescission of DACA, by overturning it completely or by preventing Department of Homeland Security (DHS) from using biographical data garnered through DACA in enforcement actions. I’m tracking these lawsuits closely.

Despite these setbacks, some DACA recipients are eligible to apply for green cards. DACA recipients who are married to U.S. Citizens (or lawful permanent residents) should contact an immigration attorney to learn more.

A more general solution remains elusive. Congress may act to formalize DACA through legislation; but, in my view, the chance of that happening is low. The more likely outcome is that President Trump will lift the rescission of DACA. We know he wants to. How do we know? 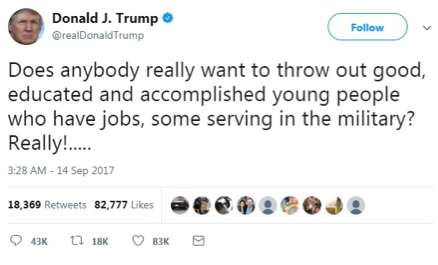