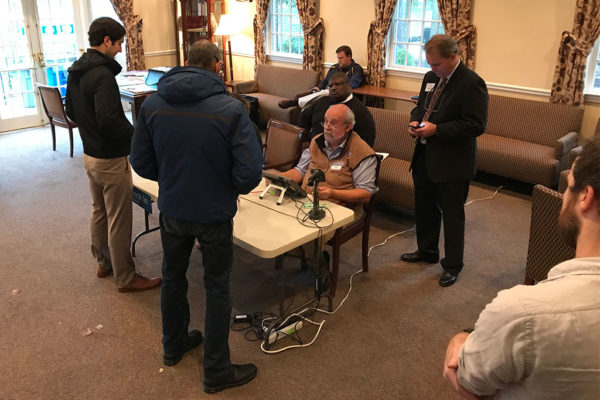 The Virginia Department of Emergency Management is warning that some voters are receiving calls falsely telling them their polling place has changed.

In a tweet this afternoon, VDEM said these calls are false, and that registered voters can confirm their polling place online.

Reports of VA voters receiving FALSE calls that their polling place has changed. All voters can confirm locations at https://t.co/P6LvWYRKA1 pic.twitter.com/7FTX2nTBnz

The Arlington County elections office said it estimated turnout of 40 percent today at the polls, plus another 8 percent of registered voters voting absentee. That represents a slight slowdown from the noon estimate, when turnout was at about 31 percent at the polls.

Arlington County registrar Linda Lindberg told ARLnow earlier that the arrival of steady rain slowed turnout somewhat. But it still means Arlington is well on track to beat the final turnout of 49 percent in 2013, when Democrat Terry McAuliffe defeated Republican Ken Cuccinelli. Plus, a break in the steadier rain is expected as Northern Virginia residents start to leave work.

Earlier today, the candidates in today’s election hit the streets, making their final pitches to voters as they headed to the polls.

Arlington County Board member Libby Garvey tweeted a photo of her meeting voters alongside Erik Gutshall, the Democratic nominee for an open County Board seat and her one-time primary opponent.

Gutshall also tweeted a photo alongside Arlington School Board Democratic endorsee Monique O’Grady, while fellow School Board candidate Alison Dough has rolled out yard signs made by her children to try and swing voters her way.

Independent County Board candidate Audrey Clement was out in the Fairlington neighborhood near the Abingdon precinct this morning, sporting a rain jacket and an umbrella while she greeted voters and passed out flyers. 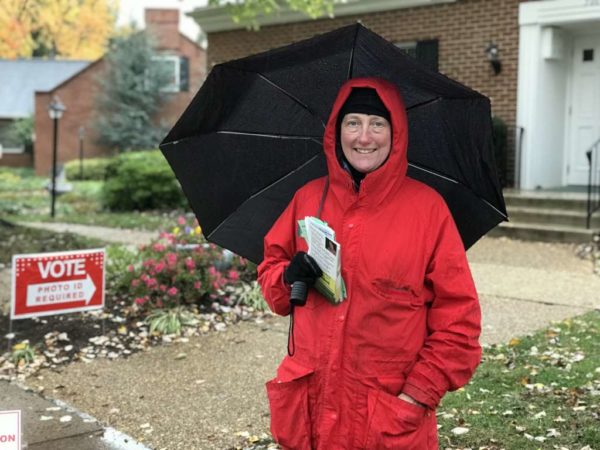 On social media, Independent County Board candidate Charles McCullough shared photos of him out meeting voters across the county.

And Attorney General Mark Herring visited Arlington this morning as his bid for re-election entered its final hours. Herring tweeted a photo of him meeting potential voters at Bob & Edith’s Diner on Columbia Pike, also part of the 49th House District, where Del. Alfonso Lopez (D) has faced a challenge from Republican Adam Roosevelt.