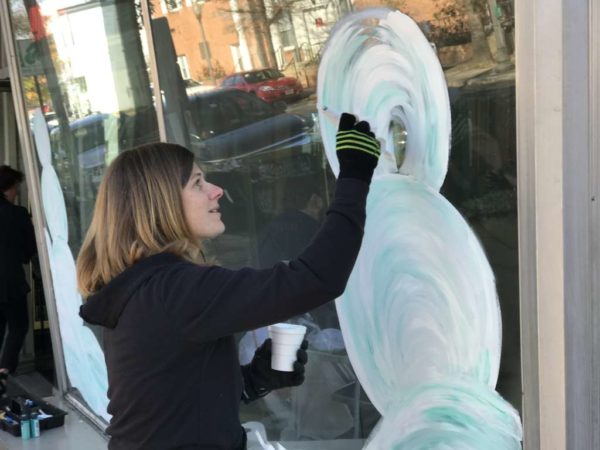 Lost Hikers Found Near Chain Bridge — Two men who had apparently been hiking along the Potomac River got lost and had to call emergency dispatchers after one of them fell and hurt himself. The call came in around 2:30 a.m. this morning. Arlington, Fairfax County, D.C. and U.S. Park Police units helped to search for the men — Fairfax used its police helicopter — and eventually they were found and transported to the hospital. [WUSA 9]

Video: ACFD Responds to FC Vehicle Fire — A minivan caught on fire in Falls Church over the weekend and a camera was rolling as Arlington County firefighters arrived to extinguish the blaze. [Twitter]

Holiday Decorations Going Up — Around Clarendon yesterday — and perhaps in other parts of the county as well — lights, window paintings and other festive decorations were being put up in anticipation of the holiday season. [Instagram]

Arlington Mill Gym Floor Installed — The new gym floor has been installed and is ready to use at the Arlington Mill Community Center. The gym’s previous floor had to be removed due to water damage stemming from a March snow storm. [Twitter]

Reporter Accused of Unwanted Advances in Local Bar — New York Times reporter Glenn Thrush has been suspended following accusations that during his time at Arlington-based Politico, he made unwanted sexual advances at young, female colleagues while drinking at a Rosslyn bar. [Vox]