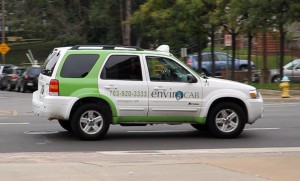 A tipster reported calling the Columbia Pike-based company last week, but getting a message on the phone saying they were no longer in service.

Calls to the company this week yielded the same result, while its website is “Temporarily out of service.”

“We are sorry to inform you that this service is no longer in operation. Thank you,” the message said. Arlington County Police Department spokeswoman Ashley Savage said Envirocab closed on November 1.

The 50-cab service was sold in 2013 to transportation conglomerate Veolia Transportation, which operates more than 2,400 taxicabs around the country. It began in 2008, and back then was the first all-hybrid fleet in the country. Since then, hybrid cabs have become more commonplace among local taxi fleets.

A Yelp review of Envirocab posted last month complained that the “service continues to deteriorate” and that “the last two times I attempted to use Envirocab, they failed to show up.”