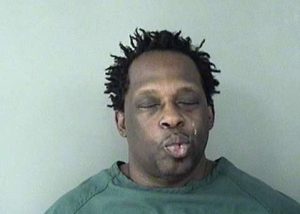 A man suspected of robbing a store on Columbia Pike was arrested while trying to steal a car in the Rosslyn area, according to a pair of ACPD crime reports.

The alleged crimes happened over the weekend.

Around 9:15 p.m. Saturday, police say 54-year-old Arlington resident Donnell Cook held up a store on the 5500 block of Columbia Pike by implying to the clerk that he had a gun, before fleeing on foot. The store was not named in the police report.

The next day, just before midnight, police say they responded to the 1800 block of N. Quinn Street, in western Rosslyn, for a report of a man tampering with a vehicle. They say they found Cook inside a car that had “extensive damage,” and identified him as the previous night’s robbery suspect.

Cook is now facing a litany of charges, including robbery, attempted grand larceny auto, destruction of property and providing false identification to law enforcement. Earlier this year Cook was arrested and charged with public intoxication.

ROBBERY, 2017-12020258, 5500 block of Columbia Pike. At approximately 9:15 p.m. on December 2, police were dispatched to the report of a larceny just occurred. Upon arrival, it was determined that an unknown suspect entered a business and approached an employee behind the counter, implying he had a gun. The suspect forced his way behind the counter and stole money from the cash register, before fleeing on foot. Units set up a perimeter and a K-9 track yielded negative results. During the course of the investigation, officers developed a suspect identification and obtained an arrest warrant. Upon hearing the broadcast suspect lookout in the below attempted grand larceny auto (2017-12030251) case, officers responded and confirmed he was wanted on the outstanding robbery warrant. Donnell Cook, 54, of Arlington, VA, was arrested and charged with Robbery and Providing False ID to Law Enforcement to Avoid Arrest.

ATTEMPTED GRAND LARCENY WITH APPREHENSION, 2017-12030251, 1800 block of N. Quinn Street. At approximately 11:57 p.m. on December 3, police were dispatched to the report of a suspect tampering with a vehicle. Upon arrival, a suspect was located inside of the vehicle, which had extensive damage. Arriving officers identified the suspect as being wanted in a robbery case that occurred on December 2. Donnell Cook, 54, of Arlington, VA, was arrested and charged with Destruction of Property, Possession of Burglarous Tools and Attempted Grand Larceny Auto.