Sponsored by Monday Properties and written by ARLnow.com, Startup Monday is a weekly feature that profiles Arlington-based startups and their founders, plus other local technology happenings. The Ground Floor, Monday’s office space for young companies in Rosslyn, is now open. The Metro-accessible space features a 5,000-square-foot common area that includes a kitchen, lounge area, collaborative meeting spaces, and a stage for formal presentations.

(Updated at 12:20 p.m.) It’s less than a year old, but media startup Axios is growing fast and ready to put down roots in Clarendon.

The company, which launched in January and has since commandeered its own wing of the MakeOffices Clarendon coworking space, has signed a 10 year lease for a floor in the same building, we’re told.

Axios will soon start the build-out process for its new space on the 13th floor of the office building at 3100 Clarendon Blvd. It expects to move out of MakeOffices and into the new space by mid-2018. 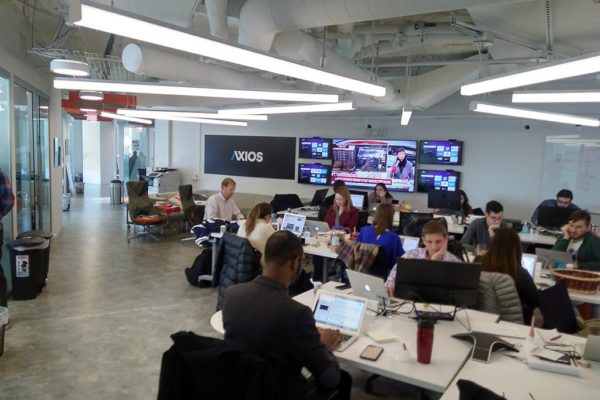 The new office is expected to have all of the accoutrement of a startup company that bridges the media and technology worlds: bigger versions of its employee lounge, dubbed “Relaxios,” and its free snack bar, “Snaxios,” in addition to features like a video studio and a “live shot” camera for television interviews of its journalists. 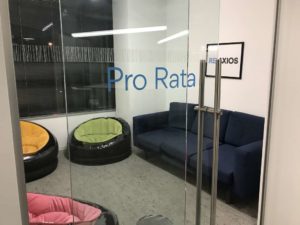 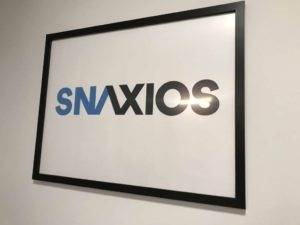 Schwartz says Axios currently has 90 employees but will likely have 120 by the time of the move and 150 by the end of 2018. Last month the company announced that it had raised another $20 million from venture capital firms, NBC Universal, Laurene Powell Jobs and others.

Axios received an economic development grant from Arlington County to incentivize it to stay here, Schwartz told ARLnow.com. The amount of that grant was not immediately available.

There were other factors that led the company to launch and now stay in Arlington, according to Schwartz. For one, he and Allen live in the neighborhoods around Clarendon, while VandeHei lives in Alexandria, making for an easy commute. Beyond that, however, Schwartz praised Arlington and Clarendon for its proximity to bars and restaurants, ease of access to D.C., and comparatively lower rent and lower taxes than the District.

“We’re very excited to be in Arlington,” he said. The company also has satellite offices in New York City and San Francisco.

Axios covers a number of news verticals, including politics and policy, business, technology, media, healthcare, science, energy and the “future of work.” While plenty of other national news outlets cover the same topics, Schwartz said the secret to Axios’ success is its focus on “smart brevity.”

In a world where there is “too much noise” in people’s lives, Schwartz said, Axios stands out by publishing radically concise articles that include only the most important facts and no filler.

“We’re going to cut straight to the chase,” he said. “Here is the information and, even more importantly, here is why it matters.”

Smart brevity extends to the business side of Axios. The company eschews programmatic banner ads, which Schwartz says are ineffective, and instead publishes very brief pieces of sponsored content on its site and in its popular email newsletters. Some recent clients include Morgan Stanley, Koch Industries, Fusion Media Group and Boeing.

Schwartz says its advertising has been working, producing audience engagement that is “off the charts.” Readers, he said, appreciate that in its coverage and its advertising, Axios is respectful of their time.

While BuzzFeed, Mashable and other venture capital-funded, online-only media companies have stumbled this year in their quest for growth, Axios is exceeding growth expectations. Schwartz credits smart brevity for that, in part, but also attributes Axios’ success to having the three pillars of its operation — the editorial, business and technology sides — working in concert.

Despite the challenges faced by others in the digital media industry, Schwartz he is “very confident” that Axios’ model is scalable and that its growth will continue.