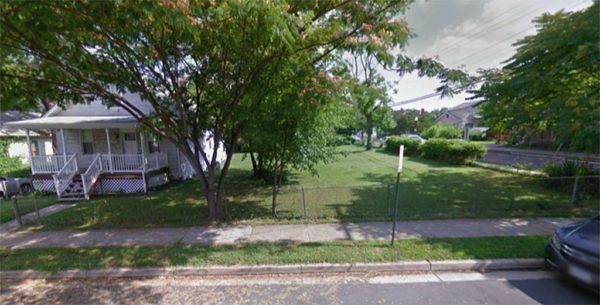 The Arlington County Board will consider a plan to buy vacant property in Aurora Highlands to create space for new parkland in the neighborhood.

The Board is set to spend $1.23 million to buy a bungalow at 905 20th Street S. and the adjacent lot, which is vacant. Someone rents the house, but earlier this month agreed with its owner to terminate the lease on February 1, 2018, with no rent due for January. The property’s assessed 2017 value is $1.068 million.

Under a plan put forward by county staff, the house would be demolished and the driveway removed to make room for a quarter-acre public park at the intersection of 20th Street S. and S. Ives Street.

“The acquisition of the property would create an opportunity to increase park land in the densely-populated Pentagon City area,” staff wrote in a report. “The approximately [quarter-acre] new park could be used to provide the kind of casual use space residents in the area have been asking for — a park that is open and available for a range of casual uses such as having a picnic, throwing a Frisbee, laying out on a blanket, reading or having small social gatherings.”

Members of the Aurora Highlands Civic Association told the county about the opportunity buy the lot.