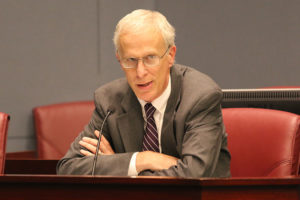 The county’s Bicycle Advisory Committee has been revamped for the new year by County Manager Mark Schwartz, who has installed a new member as chair.

In a letter dated December 27, 2017, Schwartz told the group he wanted to make the group “more fully representative” of the biking community, and have more civic and citizen associations represented on the 18-person committee. Currently, Schwartz said, less than five of those groups are represented.

And he said that starting this month, the eight members that have “rarely or never attended” meetings would be removed from the committee. The BAC provides advice on issues that affect cycling in Arlington.

Schwartz also appointed Edgar Gil Rico, a member of the Washington Area Bicyclists Association and the county’s Master Transportation Planning Bicycle Element Working Group and an instructor with the League of American Bicyclists, as chair.

“I would like to begin 2018 with a renewed spirit by re-establishing the [Bicycle Advisory Committee] into a committee that is more fully representative of the current Arlington cyclist community; to accomplish this we need to engage citizens from our collective populations who have not been previously represented,” Schwartz wrote.

But Schwartz’s decision appears to be unpopular in some quarters. One anonymous tipster wrote that it caught the current members by surprise.

“The group was blindsided by the letter, and one long-standing member has resigned, apparently in protest,” the tipster wrote.

Former BAC chair Gillian Burgess confirmed the letter, and said she was “as surprised by the County Manager’s email as the rest of the BAC.” Burgess declined to comment further, but confirmed that one “longstanding member did resign and his expertise and experience will be missed.”

Chris Slatt, chair of the county’s Transportation Commission, said Randy Swart was the member to resign. Swartz was described in a 2007 article as a “bike safety crusader.”

Slatt criticized the decision, saying that committee members have been “left in limbo” as to whether they are still members, or when the next meeting will be. Burgess and Slatt said they had not been consulted on the decision.

“Expanding the diversity and representation of the BAC is a worthy goal, but this seems like an ill-considered and rude way to do it — especially right in the middle of the process to update the bike plan,” Slatt said. “As chair of the Transportation Commission I have worked with my board liaison over the years to to try ensure a diverse set of viewpoints on [the commission] — geographically, demographically and even trying to get a mix of homeowners and renters.”

“It could be done, over time, as a partnership between the chair and the Manager through new appointments without having to tell existing members that their service is no longer wanted.”

Schwartz’s full letter to the group is after the jump.

As we approach the end of another very productive year in advancing cycling projects and updating the Master Transportation Plan’s Bike Element, I’d like to express my gratitude for your service on Arlington County’s Bicycle Advisory Committee (BAC).

I would like to begin 2018 with a renewed spirit by re-establishing the BAC into a committee that is more fully representative of the current make-up of the Arlington cyclist community; to accomplish this we need to engage citizens from our collective populations who have not been previously represented. The County has sixty-two registered civic and citizen associations; however, the BAC membership currently represents less than five of them.

To that end, I will be revamping the membership of the BAC to include representatives from more civic and citizen associations. There are currently eighteen members in the active member roster, however, only ten have regular attendance; eleven members are not representatives of an organization or civic association. Beginning in January 2018, the eight members that have rarely or never attended meetings will be removed from membership on the committee. The goal will be to have or minimum 15-member committee seated within 30 days of the first BAC meeting in January.

I will be appointing a new member, Edgar Gil Rico, who will also serve as the new Chair to help the County establish new goals, recruit representation from civic organizations and continue to work of the BAC. Edgar is a member of WABA, Arlington County’s MTP Bicycle Element Working Group, and an instructor with the League of America Bicyclists.

Please join me in welcoming Edgar to the BAC.