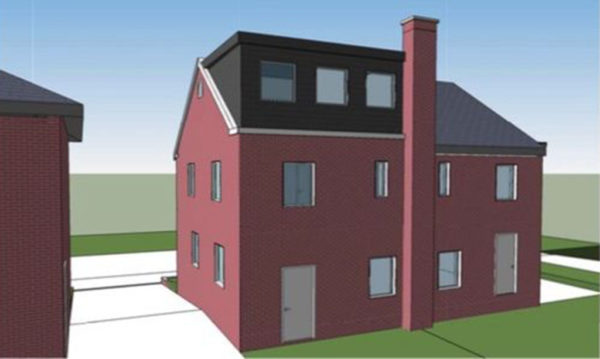 Two residents have launched a petition to try to change the Arlington County Zoning Ordinance after the Board of Zoning Appeals denied their plan to add a story to their home.

John and Gina Quirk, who live on 20th Road N. in the North Highlands neighborhood north of Rosslyn, had an application to convert an unused attic at their duplex home (pictured above) into a third-story bedroom rejected by the BZA late last year.

John Quirk said the “minimal” addition to make more room for their expanding family had the support of all their neighbors. It also had the support of some BZA members, who said at their December meeting that the fact that it stayed within the property was laudable.

“I think this is a really wonderful attempt to gain more space without increasing the footprint, and if we don’t grant these kinds of variances, then we’re faced with variances where they want to expand with the footprint,” said BZA member Charles Smith. “I think this gives developers and builders a [really] good model on how you can gain more with less.”

But the BZA voted down the proposal by a 3-2 margin on the grounds that the R2-7 zone for the property, a residential zone for townhouses and two-family homes, does not allow for such expansions by homes that were built before the Zoning Ordinance took effect. This home was built in 1939.

Such extensions are allowed for homes in other, similar residential zones, but in the Quirks’ zone it requires a special exception from the BZA.

In denying the extension, BZA members urged the Quirks to petition the County Board to change the Zoning Ordinance to allow the extensions in the zone where their home is.

“There’s hundreds like you, so maybe it could be a worthwhile community project for you to be the poster child for,” said BZA member Peter Owen, who also said the Zoning Ordinance is “broken.”

So the Quirks have done just that, and launched an online petition that has 91 supporters so far. The pair said their efforts could help the county address its lack of affordable housing and help people not be priced out of the county when they need more space.

Image via John and Gina Quirk