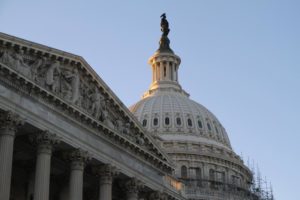 Arlington County’s representatives in Congress are blaming Republicans for the looming government shutdown, set to take effect at midnight tonight.

The U.S. House of Representatives passed a short-term continuing resolution late last night (Thursday) to keep the federal government open for another month while negotiations continue on a long-term spending deal.

A major sticking-point for Democrats is the status of immigrants under the Deferred Action for Childhood Arrivals program, who were brought to the United States illegally as minors and shielded from deportation.

President Donald Trump announced he would end the program as of March, and since then Democratic legislators have pushed for a permanent solution.

Rep. Don Beyer (D), who represents Arlington in Congress as well as Alexandria, Falls Church and a section of Fairfax County, slammed the continuing resolution as “appalling and absurd.” It is the fourth in as many months as wrangling over the federal budget continues.

Beyer’s full statement is below:

“House Republicans are now forcing us to take our fourth vote on a short-term funding resolution in as many months. This is appalling and absurd.

Like my fellow House Democrats, I spent months imploring my Republican colleagues to take action on key priorities for the American people, including passing long term funding for the Children’s Health Insurance Program (CHIP) and protecting Dreamers. But they were too busy trying to use hundreds of thousands of young people’s lives as leverage and cutting taxes for the wealthy to solve these problems.

Donald Trump claims he wants to help Dreamers, yet he keeps taking to Twitter to derail bipartisan efforts to solve a problem he created. Republicans suddenly decided this week that they cared about CHIP, but they could have passed a clean reauthorization of CHIP any time in the past few months and refused to do so.

The President keeps talking about how ‘our military needs’ this, but has he listened to them when they have said that they need long term budget certainty? The same is true of our non-defense agencies, which are having to guess again and again about when and how they will be funded as the Republicans who have complete control of government repeatedly fail to do the basic job of governing.

The federal workforce deserves better than to experience the fifth Congressional budget fight in five months in February. I do not want the government to shut down, and today introduced bipartisan legislation with my friend Congressman Rob Wittman to protect federal workers’ pay if that happens. But Congress’ refusal to live up to its basic responsibilities to the American people must end.”

Were the government to shut down, for the first time since 2013, many federal workers would be furloughed — sent home without pay. It would also represent the first time that the federal government has shut down with one political party in control of all branches of government.

And Beyer has tried to mitigate the impact on federal workers — many of whom live in his district — by introducing the Federal Employee Retroactive Pay Fairness Act alongside fellow Virginia Rep. Rob Wittman (R).

The bill, which the pair introduced last April when another shutdown threat threatened, would guarantee back pay for federal workers who are furloughed.

“We are working hard to avoid a government shutdown, but if it comes our bill would protect federal workers from the worst of the consequences,” Beyer said in a statement. “This legislation is designed to shield civil servants, who need to support their families, from the disastrous effects of Congress’ failure to agree on a budget measure. We hope it will not be needed, but time is running out.”

In a joint statement Thursday, U.S. Sens. Tim Kaine and Mark Warner (both D-Va.) criticized the House’s continuing resolution. The plan appears to have significant opposition from both sides of the aisle in the U.S. Senate.

The pair said it creates “uncertainty” to not have a long-term budget deal and to instead rely on short-term resolutions, and ignores many important issues.

“The current CR ignores key priorities — community health centers, permanent protection for Dreamers, emergency relief for Florida, Texas, western states ravaged by wildfires, Puerto Rico, the USVI, opioid treatment, and pension reform,” they said. “These issues are not going away and need to be addressed immediately.”

Kaine and Warner’s full joint statement is after the jump.

“We oppose the House Continuing Resolution, which punts budget discussions until mid-February. Congress should remain in session with no recess until we work out a long-term bipartisan budget deal that addresses all issues. We will support a short-term CR for a few days to keep the government open while we stay in town and conclude our negotiations.  But we do not support perpetuating the current budgetary dysfunction that is hurting our country and our Commonwealth. The Republican leadership has to get serious about finding a budget deal and quit relying on short-term patches.

“This is the fourth CR since the start of the fiscal year and would take us into the fifth month of the year with no budget deal. One-month CRs hurt all spending priorities and create deep uncertainty.  This pain is particularly acute in Virginia, which is home to hundreds of thousands of government employees, kids who rely on CHIP, military families, and national security professionals. Recently, Defense Secretary Mattis came to the Senate and appealed to us that we not pass another CR but instead do a full budget deal. As Senators who represent the state most connected to the military, we know he is right and know these continued gimmicks hurt our troops in Virginia and across the globe.

“The current CR ignores key priorities — community health centers, permanent protection for Dreamers, emergency relief for Florida, Texas, western states ravaged by wildfires, Puerto Rico, the USVI, opioid treatment, and pension reform.  These issues are not going away and need to be addressed immediately. We gave negotiators time to reach a bipartisan agreement to protect Dreamers and now they have a deal. This must be part of the negotiations, and there should be a vote on the compromise – or a clean Dream Act – without further delay.

“Finally, the President’s repeated statements urging a government shutdown are beneath the office and have heightened the budgetary dysfunction.  And his determined efforts to blow up any and all bipartisan discussions around Dreamers demonstrate that he is not interested in governing. He has to decide whether he wants to be President and engage in necessary compromise, or continue offering commentary from the sidelines.”

END_OF_DOCUMENT_TOKEN_TO_BE_REPLACED

More Stories
Morning NotesFlying Colors: The Year of the Bird