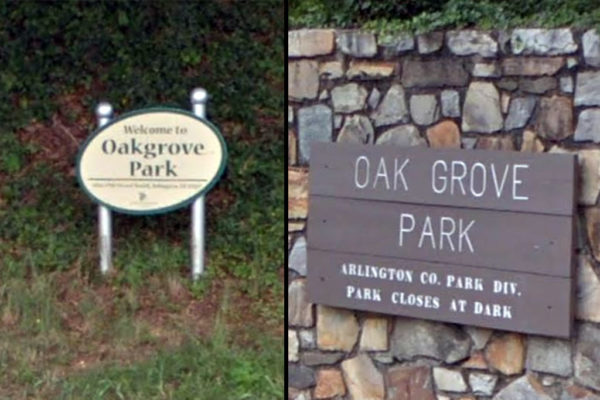 Cherrydale residents are seeking to reclaim the original spelling of a neighborhood park as it goes through a second phase of renovations.

In a presentation at an Arlington Parks and Recreation Commission meeting yesterday (Tuesday), neighborhood resident Harry Spector said he wanted to clarify the spelling of Oak Grove Park as two words and not one word.

There are three signs currently in the park that spell it as Oakgrove. However, the original sign in the park spells it as Oak Grove.

“With this being the oldest sign at the park, it’s clear to us that this was the county’s original intended spelling of the park,” Spector said.

Though the Oakgrove spelling is cited in the county’s Parks and Recreation master plan, Spector said there is no record the county intended to change the spelling.

“It’s a typographical error that was never corrected,” he said.

Other official documents since the 1990s that required county approval have also used the two-word spelling, Spector said.

While it seems the change could be made administratively, Spector said he was directed to the Parks and Recreation Commission by county staff, as there is a two-part process for renaming parks. The commission makes recommendations to the Arlington County Board, which has the final say on approval.

“It’s a little time consuming to correct a typo, but it’s probably the only way to do it,” said David Howell, a commission member.

Spector was hoping to fast-track the change, since the county acknowledges the park as Oak Grove while the department references it as Oakgrove. He said he wants the change to happen before the park’s renovation is complete, sometime between February and May.

The renovations include a new playground for 2-5 year-olds and 5-12 year-olds. There will also be new benches and a new gazebo with picnic tables.

All the members of the committee agreed with Cherrydale residents that the name should be changed, and will be holding another meeting on the protocol of name changing and will include another motion to move forward the spelling of the park.

“It’s kind of absurd to have go through such a process for a simple, obvious grammatical error,” Spector said.