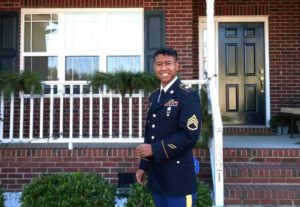 This year’s Arlington County Board race has a new entrant: Chanda Choun.

Choun, who lives in the Buckingham neighborhood, announced his candidacy this morning with a press release on his website.

Highlighting his background as a Cambodian refugee, an Army veteran and a cybersecurity professional, Choun says he wants to be “a new face for Arlington and a different voice at the table for good jobs, affordable housing, fast transportation, strong schools, security and safety, and service to the community.”

Though he was not born here, Choun says Arlington is “the love of my life.”

Choun will face Matt de Ferranti, and any other Democrat who enters the race, in June’s Democratic primary. The winner of that contest will challenge incumbent Board member John Vihstadt, who is running as an independent, in the November general election.

More about Choun from his press release:

Choun declared that he wants to “Make Arlington the North Star of Virginia.”

“I am running for the Arlington County Board this 2018 because there is no immigrant, military veteran, or technology professional in our local government leadership today. I want to be a new face for Arlington and a different voice at the table for good jobs, affordable housing, fast transportation, strong schools, security and safety, and service to the community; a 21st century approach in a rapidly changing world, but still holding on to the values that made our community great.”

Chanda Choun lives in the historic, diverse Buckingham neighborhood of Arlington County, Virginia near the Ballston Metro Station and works as a senior business manager and engineering leader for a cybersecurity software company headquartered in Dallas, Texas. He is also a part-time Army Reserve soldier occasionally on duty with the United States Cyber Command at Fort Meade, Maryland. His community involvement includes being Vice President of the Buckingham Community Civic Association, Delegate to the Arlington County Civic Federation, Lifetime Member of the John Lyon Veterans of Foreign Wars Post 3150, Parishioner of St. George’s Episcopal Church of Arlington, and previous Executive Board Member of the Arlington Young Democrats.