A D.C. taxicab drove onto the Custis Trail yesterday and the incident was caught on video.

The taxi was seen driving onto the bike path Monday afternoon near the MOM’s Organic Market on Lee Highway. A passerby saw it happen and ran to make sure the driver, who was apparently lost, was able to safely get off the trail and back onto the road.

“I followed him right away to make sure he backs up,” said Wael Salha, who also took the video.

Salha says that he frequently uses the path and believes that a narrower trailhead and more car-blocking bollards could have prevented the driver from mistakenly turning onto the path. 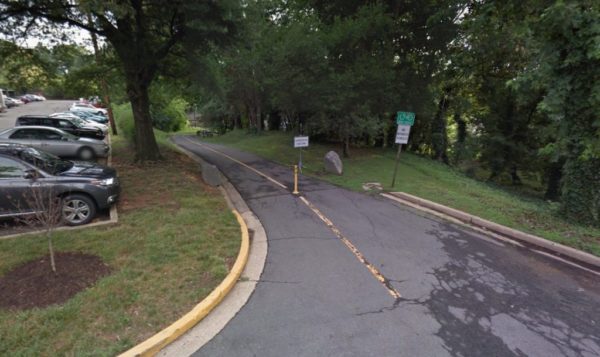 “I always use that trail and I was really worried,” he said, adding that he’s not trying to get the driver in trouble.

“I hope that this will not affect the driver’s job,” he said. “This is not my intention, I was only concerned about the people’s safety and [want] more precaution on the county’s end.”

A V.I.P. Cab Company phone operator was unable to connect ARLnow.com to the driver with partial plate numbers, but was able to confirm that all cab drivers with V.I.P. are required to use G.P.S. while driving passengers. The operator added that normally the cab company stays within Washington, so the driver was in unfamiliar territory.