Led by owners Tim O’Brien and Kevin Loos — who you might meet in the taproom — head brewer Drew Stephenson and his wife Alex, Pleasure House is passionate about two things: making great beer and serving their community.

Each batch of beer is brewed on a seven barrel system, meaning that they are a Virginia brewery serving Virginia.

When it comes to the making-great-beer part, they’re not shying away from trying new things. They have brewed an estimated 175 different beers in the more than three years that they’ve been open.

Drew divides the styles by IPAs and European styles with a particular emphasis on British, Belgian and German beers. That leaves the door open to just about any style you can think of from lagers to sours.

As for serving their community, Pleasure House holds a potluck called Crock for a Cause every Sunday to raise money for local charities. Proceeds from their Rain Barrel Bohemian Pilsner — brewed with rain water collected at the Chesapeake Bay Foundation headquarters — goes support the Foundation.

In addition to it’s financial support of local groups, Pleasure House is the first Ocean-Friendly Restaurant for the Virginia Beach chapter of the Surfrider Foundation, and frequently help out with the Better Beach Project.

Pleasure House believes that the community that they are part of makes them a better brewery. Now they are excited to share their beer with their distant neighbors to the north. I got to try two of their most recent brews. 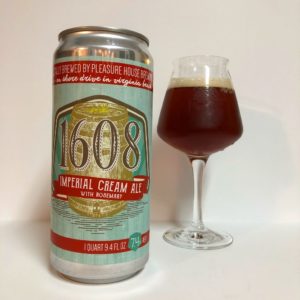 The Brewers Association classifies cream ales as hybrid ales, meaning they’re brewed with either ale or lager yeast at the warmer temperatures of an ale then lagered or stored for a period of time.

They tend to be blond in color and relatively low alcohol. They also tend to be rather plain — making for a great pairing with stronger flavors like coffee. Well, consider Pleasure House’s Imperial Cream Ale an extreme hybrid beer.

Of course, the “Imperial” adds up to a higher-than-usual alcohol content — 7.4% as opposed to around 5%.

The rosemary first appears like a whisper in the aroma among wheat bread and wine.

Whereas most cream ales are relatively clean in flavor, this beer is more complex. Up front, it’s bready and alcohol sweet but it transitions to a meaty umami flavor when the rosemary kicks in. I was reminded of Dogfish Head’s Rosabi — their Imperial pale ale brewed with wasabi. It, too, had a foody quality that was unlike most other beers. Drink this with a hearty burger or maybe a roast — it’s definitely a supper beer. 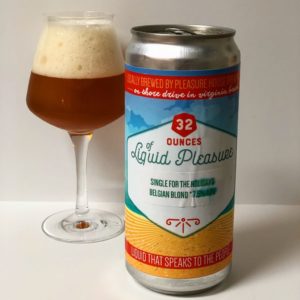 Pleasure House makes their blonde with an optional “e” and with an extra bit of tartness. The aroma begins with a tell-tale banana, but gets interesting when green plum pops up.

Sure enough, the sip begins with tart — not full-on sour — crab apple followed by a light dried apricot sweetness. Whether the tartness is intended — Belgian-style blonde ales might have fruity esters but they’re not sour — it was a welcomed surprise.

Too often, Belgian-style — that’s beers made outside of Belgium in the style — beers are cloyingly sweet or too heavy on the banana. Single for the Holidays cuts through that. Enjoy this strong brew slowly, its light refreshing flavor masks the 7.5% ABV.

Dominion Wine & Beer is excited to roll out the first of a handful of kegs from Pleasure House Brewing in their weekly beer tasting Friday, February 23 from 5-7 p.m. They will also be sharing some new beers from Evil Twin Brewing and 3 Stars Brewing Company.