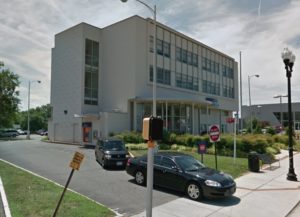 A dispute over a drive-thru ATM led a man in a Mercedes to draw a gun and make threats, police say.

The incident happened Monday afternoon, on the 3100 block of Columbia Pike, according to this week’s Arlington County Police Department crime report.

A SunTrust bank is located on that block of the Pike.

Police say that the suspect “became verbally irate” while waiting in line to use the ATM. More from the crime report:

BRANDISHING, 2018-02260160, 3100 block of Columbia Pike. At approximately 2:10 p.m. on February 26, police were dispatched to the report of a brandishing of a firearm. Upon arrival, it was determined that the victim was using the drive thru ATM when another vehicle pulled up behind him. The driver of the approaching vehicle became verbally irate, threatened the victim and allegedly brandished a firearm. The suspect is described as a black male, bald, approximately 25-30 years old, wearing glasses and a black shirt, driving a black Mercedes. The investigation is ongoing.

The rest of this past week’s crime report highlights, after the jump.

BURGLARY, 2018-02220048, 2500 block of Franklin Road. At approximately 7:54 a.m. on February 22, police were dispatched to the late report of a burglary. Upon arrival, it was determined that an unknown suspect forced entry to a business and stole cash. There is no suspect description. The investigation is ongoing.