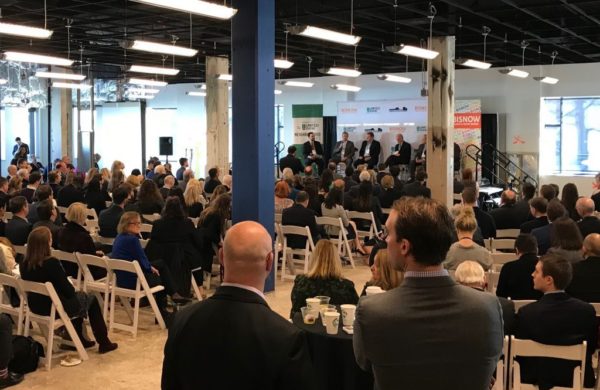 Arlington has a lot going for it, including a deep well of talented workers, but the county’s permitting office remains a constant source of business complaints.

Those were two of the major takeaways from the Future of Arlington County event held Thursday at Market Common Clarendon. Organized by online business publication Bisnow, the event brought together economic development officials, developers, attorneys and business owners.

Talent is what has drawn companies like Nestle to Arlington, and what may lure Amazon’s HQ2, said Arlington Economic Development Director Victor Hoskins. He noted that Amazon already has an “innovation center” in Ballston.

“We really want to be the innovation center of the United States,” he said of the county’s economic ambitions. “This is a talent rich target for innovative companies.”

Nestle, he said, had its employee retention rate far exceed expectations as it moved its corporate headquarters from Glendale, Calif. to Rosslyn. The company also received tens of thousands of job applicants for open positions after expecting only hundreds to apply, according to Hoskins.

To help the county continue to attract companies, particularly tech startups, Arlington Economic Development has been sending staff to large conferences, including this weekend’s South By Southwest (SXSW) festival in Austin, Texas.

Other Arlington advantages cited by panelists include walkable, mixed-use communities like Crystal City where people can live and work, and a top notch public school system that helps keep residents with children from leaving the county.

Despite effusive praise for everything Arlington has to offer, there were some negatives. Arlington could use additional cultural amenities — “places people can interact and build community,” in the words of an AED tweet. That point was reinforced by event being held at Market Common Clarendon, adjacent to the vacant former Iota Club space.

Panelists also agreed that Arlington County has plenty of room to improve its permitting process. The process should be “easier and faster in order to attract the most innovative concepts in retails and restaurants,” though the ongoing issues with the permitting process extend from small restaurants to huge developments, panelists said.

One anecdote from a Bisnow recap of the discussion:

Developers, brokers and restaurateurs say the county’s lengthy permitting process has acted as a deterrent for some companies and needs to be improved if Arlington wants to keep up with D.C. and Fairfax County. JBG Smith, Arlington’s largest property owner, last year opened a beer garden in Rosslyn to create more buzz and activity around its properties. It took two years for the landlord to get the beer garden approved by the county, JBG Smith Executive Vice President Andy VanHorn said.