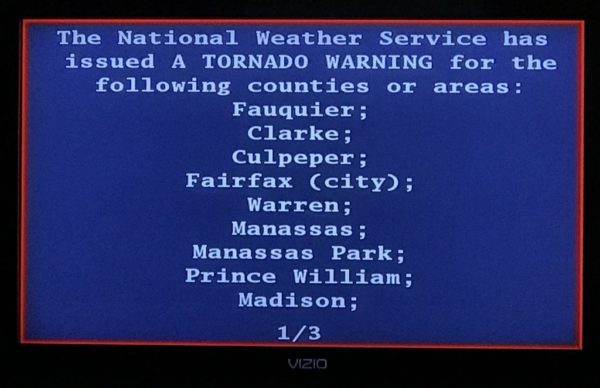 Throughout Virginia today, TVs and weather radios broadcast a test Tornado Warning as part of the annual Statewide Tornado Drill.

Anyone watching cable TV saw programming interrupted by Emergency Alert System message. A computerized voice said the Tornado Warning was just a test, but in a real weather emergency anyone seeing the EAS message should get to a basement or other secure location.

The Statewide Tornado Drill is a yearly opportunity to prepare Virginians for tornado emergencies and to test public warning systems.

Save the date! The 2018 Statewide Tornado Drill will take place on Tornado Preparedness Day, Tuesday, March 20, 2018, at 9:45 a.m. (If widespread severe weather threatens the Commonwealth on that date, then the drill will be on  Wednesday, March 21, at 9:45 a.m.)

At approximately 9:45 a.m., the National Weather Service will send a test tornado warning over NOAA Weather Radios. This test signal will sound a tone alert, show a test message or flash to indicate a message, simulating what people would hear or see during an actual tornado warning. Local radio stations, TV stations and cable outlets will also broadcast the test message via the Emergency Alert System.

The drill takes place annually on the first day of spring.

The Arlington Dept. of Public Safety Communications & Emergency Management also participated in the drill and live tweeted it.

It's almost time. Are you ready for it? #VATornadoDrill Once you have reached your determined safe area, crouch as low as possible to the floor, facing down and covering their heads with their hands. pic.twitter.com/piG88zsYxc

The #VATornadoDrill is NOW! Get to a safe location – Use stairs to reach the lowest level of a building; avoid using elevators NOW! pic.twitter.com/S8T3MinK6Q

EM Staff take shelter in the garage during the #VATornadoDrill pic.twitter.com/zpzI6d3kM2