Title insurance is boring, but Allied Title & Escrow is here to decode the jargon and make it (somewhat) more interesting. This biweekly column will explore the mundane (but very necessary!) world of title insurance while sharing interesting stories of two friends’ entrepreneurial careers.

This week we discuss how Dressing up for Halloween as Ace and Gary led to a partnership with Saturday Night Live, Disney and ABC… oh and the title tip of the week!

Yes we will give you some title tips this week, and I know last week’s horror story version of the title and obstacle-racing industry wasn’t the most motivating, but today we are going to provide you with a slightly ridiculous story of how you never know how choices you make might lead to something much bigger than you ever dreamed.

Approximately 10 years ago, my friend and business partner (Steve Stoloff) and I (Latane) were looking to win a costume contest on Halloween and we always wondered why no one sold Ace and Gary costumes from Saturday Night Live.

If you don’t remember Ace and Gary, click here to see a video from many years ago. Outrageous, ridiculous… everything you want out of a Halloween costume! 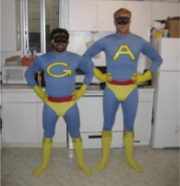 We decided to go to Walmart and buy long johns, underwear and food coloring. 3 hours later we had what we thought was a costume, that somewhat resembled the characters on the show.

We went out that night, got offered $250 on the spot by SNL fans and won two Halloween costume contests for $3,000 total. A nice little evening! We decided that maybe we were on to something and we would try to sell them online the following year.

11 months later we remembered our previous year’s success and decided to pop up an Ebay store with pics of us wearing our homemade costumes from the year before. I think we both hoped we could generate some grocery and beer money for the month of October… maybe November.

We were charging $150 for the set so we thought it would be too expensive for people. Apparently it wasn’t because within a week we had sold over 300 costumes.

Now we were faced with our biggest issue, how the heck are we going to make this many. After buying out all the long johns and underwear in town at Walmart and Target, we made costumes around the clock for a week and we actually fulfilled all the orders.

We had no idea we would sell this many and we knew we couldn’t keep making these costumes unless we actually had a partnership with SNL. I sent in a cold email to SNL about the possibility of working together on Ace and Gary costumes. Shockingly Broadway Video (Lorne Michaels’ company who handles licensing for SNL) responded. I then had a friend of a friend in the licensing business join the call since I had no idea what licensing even meant to help me negotiate a deal.

The experienced licensing rep helped us secure a deal and the next year we manufactured high quality Ace and Gary costumes, which were one of the best sellers nationwide.

It went so well that we sold the company we created, Ridiculous Costumes, to a much larger Halloween company. Still today the costumes are sold online and here is a picture of our friends who we made wear the costumes for our first photo shoot.

After getting my feet wet with licensing and learning how deals should be structured, my business partner and I ended up rebranding our ROC Race AKA Ridiculous Obstacle Challenge to WIPEOUTRUN after partnering with Disney and ABC’s hit TV show Wipeout.

Point of the story: You never know how one idea or one relationship can lead to much more than you ever expected.

We had no idea what we were doing but we continued to try to learn and luckily we took those learnings onto the next project. At Allied Title & Escrow, we’ve had relationships we didn’t expect much from lead to our biggest relationships today. You just never know…

Title Tip of the Week: If you are buying a condo, you don’t need the enhanced title policy… just go with the standard title policy. It will save you money and you will be protected on your investment.

With that said, we recommend people always do the enhanced title policy for single family homes. You want the 50% appreciation it provides over 5 years and the protection you get on boundary issues with neighbors. Click here to learn more about the differences between standard and enhanced policies.