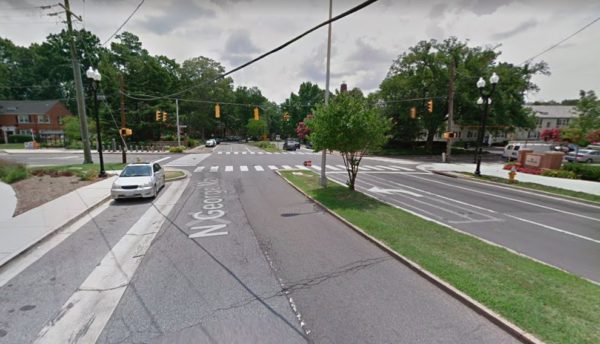 A bicyclist was struck by a vehicle and injured yesterday evening in the Buckingham neighborhood.

The crash happened around 5:35 p.m. at the intersection of N. George Mason Drive and N. Pershing Drive. Police tell ARLnow.com that “the driver of the vehicle proceeded through a green light when the bicyclist entered the intersection on a red signal and attempted to turn left.”

Initial reports suggest the cyclist, a man in his 50s or 60s, was woozy and bleeding from the face and head after the crash. Police described his injuries as “minor.”

No citations were issued to either the driver or the cyclists, according to police.

The crash apparently looked more serious than it ultimately was. From a Twitter user who witnessed it: