When Sharmi Albrechtsen’s daughter was struggling in math, she tried using robotic toys that taught coding to help.

It was a complete failure.

“I was out $300 and she wasn’t interested in it, said Albrechtsen. “It was difficult to build, difficult to code, and I thought ‘there should be an easier way to get to the coding part of things without building and also something that would engage her.” 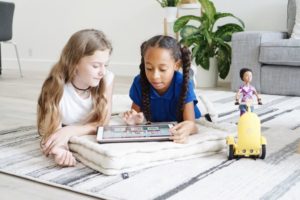 Albrechtsen noticed all the female dolls laying around her daughter’s room, and the idea came to her: why not combine a robot and doll together?

In 2016, she created SmartGurlz, later moving the company from Bethesda, Md., to Crystal City in 2017.

SmartGurlz has earned more than $1 million in sales since its inception.

Currently, there are five different female dolls with their own stories. Each character rides a scooter controlled by the user, who codes through the Sugarcoded app. Another SmartGurlz development, the app can be downloaded from various app stores.

The company intends to release a new male doll later this year, around the holiday season, Albrechtsen added.

Though Albrechtsen’s daughter is a little too old to appreciate the doll, she does work for SmartGurlz, goes to coding workshops, and holds in-store demonstrations on the weekends.

“She’s really thrilled about the product and working with us when she can, when she’s not studying,” Albrechtsen said. 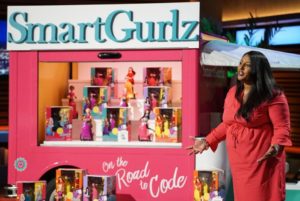 Last November, SmartGurlz landed a $200,000 investment with FUBU founder Daymond John, on ABC’s Shark Tank, in exchange for 25 percent ownership of the business. It was a tough eight months, she said, while competing against 40,000 other companies trying to get on the show.

“There were times we didn’t think we were going to be on, then we finally got chosen [it] was amazing,” she said.

After the show, SmartGurlz made between $100,000-200,000 in sales within 24 hours. Customers can buy SmartGurlz on its website, Amazon.com or Walmart.com. Albrechtsen added that she’s working on a special project with Walmart for 2019.

But while strong sales and a Shark Tank spot have been great for business, it’s been tough for SmartGurlz to support its own growth.

“The whole financing game is difficult,” Albrechtsen said. “We have major growth and you have to order products and I would say you get into this difficult area where you’re not able to support your own growth and then you lose opportunities and that’s painful.”

In the future, Albrechtsen wants to brand SmartGurlz as an educational tool, using it in after school programs. SmartGurlz is working with Girl Scouts of America and Black Girls Code with their programs, but the company wants to do more. The company is piloting programs in New Jersey and California and, hopefully, she said, eventually to the rest of the country.

“You’ll see more of an educational side from SmartGurlz in the future, where we’ll be more dedicated to curriculums,” said Albrechtsen. “That’s really the way to make change instead of having something that maybe you play with maybe you don’t.”

Photos courtesy of SmartGurlz and ABC