For the last few months, Gymaze has worked to provide Arlington gym-goers the chance to work out at a host of exercise clubs around the region without paying membership fees; now, the company has big plans to encourage people to work out together.

One of the reasons Hakan Yurt says he created the Glebewood-based Gymaze was because he was paying for a gym membership, but he wasn’t going. Similar to New York’s ClassPass, people can use the service to get access to a network of participating gyms without getting tied down.

“Why should I not create a platform that allows me to go to any studio at any time?” Yurt said.

The current model of Gymaze allows users to buy one, five, 10 or unlimited passes to a studio each month.

In a few weeks, Yurt plans to change that model so a single pass to a gym will cost $5, a pass to a class will be $12 and a pass for a session with a personal trainer will cost $50. 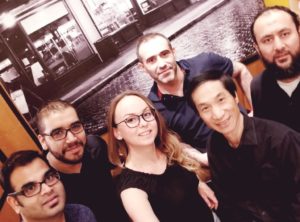 Yurt says there will also be a “pool” model, where users can get up to 50 percent off their workout if they bring a friend to any gym or class.

Yurt also wants to address a problem he sees in the workout industry, which is a lack of motivation for gym and class users.

His solution is to partner with local nonprofits, so people can work out for a good cause. For every purchase of a pass, Gymaze plans to allow users to send some of the proceeds to one of a select group of charities.

Some of the non-profits partnering with Gymaze include: Thrive DC, Special Olympics Virginia, Global Giving and Back on My Feet DC chapter.

“We are not here purely for money or profit,” Yurt said.

Beyond that nonprofit partnership, Yurt believes Gymaze’s business model will help it stand out from its competitors. Namely, he notes that (unlike ClassPass) Gymaze doesn’t require users to pay for a recurring subscription, which Yurt said can get costly if a user forgets to cancel.

With the new “pool” model, Yurt also hopes that Gymaze will become the most affordable option on the market.