Andrew Fribush, CEO of Cameral, found through his work on political campaigns in Indiana and Ohio that local races run archaically compared to the way the corporate world functions.

Presidential campaigns have the millions of dollars necessary to hire full tech teams, but local politicians can rarely afford the same luxury, Fribush says. That’s where his Crystal City-based startup comes in.

Fribush says Cameral will help anyone looking to run for office, from the local level to Congress. The company is available to help would-be candidates petition to get on the ballot, and then provides a database with information on every voter in the candidate’s area. Candidates can pay for additional, more in-depth data on those voters if he or she wants to, Fribush said. 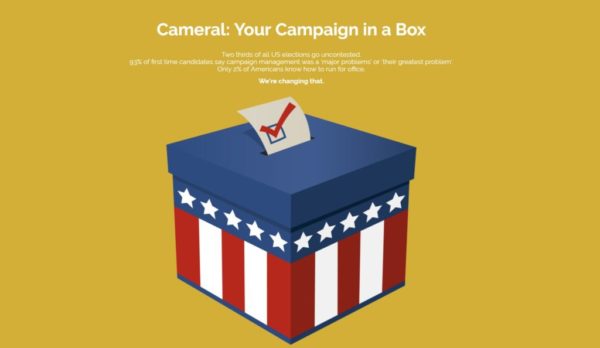 Cameral also offers an outreach service, which helps candidates post on social media and send out emails. The company even runs a “marketplace,” where Fribush and his team act as a middle man to help candidates purchase yard signs, even advertising spots. Fribush says he charges a percentage of the candidate’s fundraising generated by those ads, ranging from 5-20 percent of the total depending the size of the campaign.

Even though Cameral is focused on local candidates, Frisbush says he does have one U.S. senator as a client, in addition to a host of mayors and other local politicians. Fribush says he can’t identify which candidates he’s working with, due to non-disclosure agreements he’s signed with his clients.

Fribush says most of his clients are Republicans, a fact he attributes to the GOP’s recent dominance in state and local politics nationwide, but he represents independents and Democrats as well.

Cameral only launched in 2017 and is still in beta mode, meaning it’s only accepting 25 clients, followed by a wait list. Fribush said he’s debating fully launching the services in time for the 2018 elections, but as the election grows closer he said he’s leaning toward launching it in 2020, where there will be a huge market.

Regardless of when he launches in full, Fribush hopes his company can ignite renaissance of interest in local politics by lowering the barrier to entry.

“My dream is a world where anyone who wants to run for office, whether it’s in Arlington County or anywhere, can just do it,” Fribush said. “The importance of local government cannot be overstated. Local governments in the United States are actually larger than the federal government, if you take them collectively.”