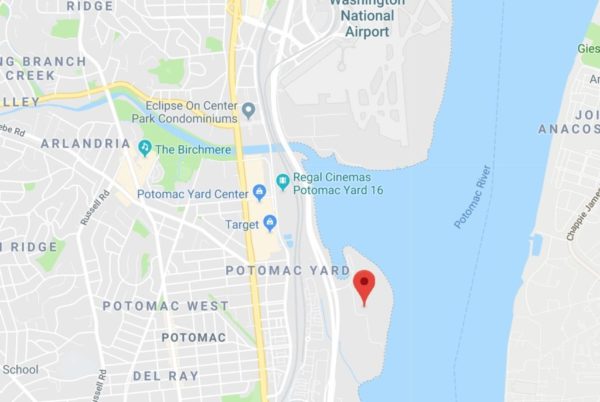 Update at 10:45 a.m. — The body of a deceased adult male was found in the Potomac River near Daingerfield Island just before 6.30 p.m. last night, according to D.C. police spokesman Dustin Sternbeck.

“MPD Harbor Patrol units were dispatched to the area of Daingerfield Island on the Potomac River to assist in the search for an alleged missing person,” Sternbeck said. “Upon arrival, we were notified that an Arlington County Fire [water rescue unit] located a deceased adult male in the water. The District’s Office of the Chief Medical Examiner recovered the individual and is working to correctly identify the decedent.”

Sternbeck said he was unable to confirm whether the deceased individual is someone sought in a missing person case in Arlington until the body has been identified and next of kin notified.

Earlier: A search operation was underway Tuesday evening for a missing person along Four Mile Run.

An Arlington County Fire Department spokesman said that the department is assisting police in a search for a “possible missing person” and confirmed that water rescue equipment was used in the search.

According to scanner traffic, a police helicopter provided assistance from the air.

A tipster characterized the search as a “body recovery” along Four Mile Run near the intersection of S. Glebe Road and S. Arlington Ridge Road, but there is no official word yet about what, if anything, was found.

An Arlington police spokeswoman deferred to D.C. police for comment, saying that the Metropolitan Police Department was the primary law enforcement agency handling the search. ARLnow.com is waiting to hear back from an MPD spokesman.