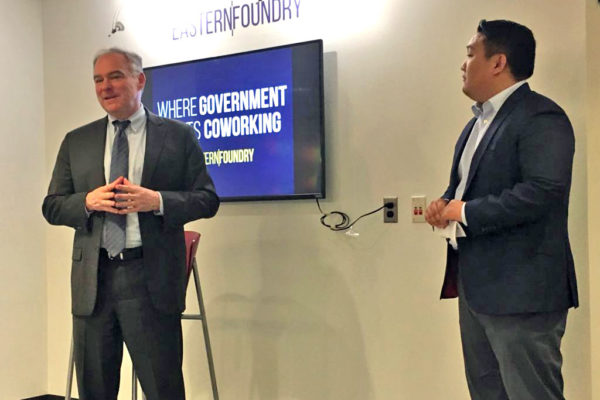 Sen. Tim Kaine (D-Va.) negotiated his fair share of economic development deals back in his days as Virginia’s governor, and he thinks Arlington has an awfully strong chance to land Amazon’s vaunted second headquarters.

The county has already emerged as a prime contender for “HQ2” and the 50,000 jobs that could come with it, with two possible sites for the massive new development pitched by state officials to the tech company: one split between Crystal City and Alexandria’s Potomac Yard, and another in the Rosslyn-Ballston corridor.

County officials have been wrestling with the question of what Amazon’s arrival would mean for Arlington’s schools and transportation systems. But, in an interview Monday at a campaign stop at Crystal City coworking space Eastern Foundry, Kaine says he sees winning the HQ2 project as a potentially “transformative” one for the county.

Arlington is vying with other Northern Virginia localities (and D.C. itself) to lure the online retail giant to the area, but Kaine believes the county’s highly educated workforce could very well prove to be the deciding factor for Amazon CEO Jeff Bezos.

Kaine admitted that Virginia and its localities might not be able to offer the same number of incentives as other places vying for HQ2 — for instance, Maryland lawmakers recently approved $8.5 billion in incentives for the company. But the senator believes Virginia economic development officials will be able to point to investments the state’s already made in its education system as an alternative to offering tax breaks or cash incentives.

“We’ve decided to try to spend resources on a really good higher ed system, really good K-12 schools,” Kaine said. “Other states put a lot of incentive money down, but they don’t have the same base. We might get outbid, but we’d say, ‘Oh, by the way, this is a long term decision. Look at our higher ed institutions, look at our schools.'”

“We didn’t put the money on the table to say, ‘This is for you Amazon,'” Kaine said. “But we’ll do some big workforce training thing in technology areas that would be good for somebody who might want to work for Amazon, but also good for somebody else.”

Kaine admits that the area’s lack of engineering or MBA programs that rank in the top five nationally could hurt Arlington’s chances, not to mention the area’s transportation challenges.

“If we were to get an infrastructure bill [in Congress], maybe we could start doing more and that would be helpful,” Kaine said. “We have a lot of strengths, but I’m sure the transportation gridlock and all the rest is something they’re going to be looking at too.”

Even those who support Arlington’s bid for HQ2 worry that Amazon bringing in tens of thousands of new residents could strain the area’s already clogged roads, not to mention the troubled Metro system. But should his predictions prove true, Kaine expects that county officials will find HQ2 to be well worth the trouble.

“I don’t know, if I was an Arlington [County Board member], how I’d view that tradeoff,” Kaine said. “But I just think big, innovative things that have the capacity to move us ahead, I’d rather have Virginia get them more than anything else.”