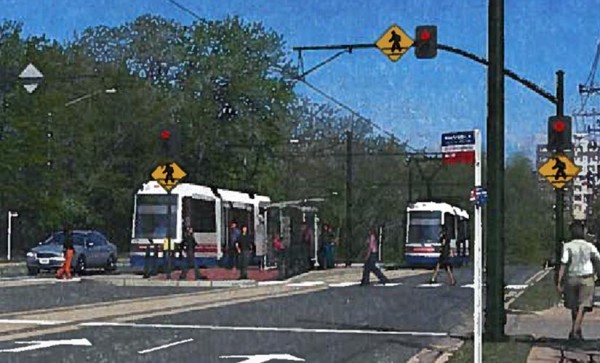 It’s a question that some have been asking themselves as Arlington has advanced to be among the most likely destinations for Amazon’s second headquarters.

Would the proposed Columbia Pike and Crystal City streetcar system have helped Arlington’s chances had it been built?

The Arlington County Board voted to cancel the project in 2014 after rising cost estimates and questions about its advantages over buses led to widespread opposition and voter discontent.

Had it been built, the streetcar would have run from Crystal City — which is seen as a strong contender among D.C. area locales — to Columbia Pike and the Skyline area of Fairfax County.

ARLnow.com talked to several insiders to get their take on the hypothetical question.

Several we spoke to, who work in economic development and on transportation issues, said that the streetcar would have been an attractive amenity in the eyes of Amazon. It would have provided a vital, high-frequency link from offices in Crystal City to workforce housing along Columbia Pike, they said.

Also cited as evidence: Amazon’s own support of streetcar system in Seattle.

However, another insider, who works in the works in the commercial real estate industry, doubts that the streetcar would have made much of a difference.

For one, the would-be streetcar is being replaced with enhanced bus service on the Pike and along the Potomac Yard-Crystal City corridor. Also, Crystal City already has one of the highest scores for transportation accessibility among HQ2 contenders, thanks to the frequent bus service, Metro’s Yellow and Blue lines, VRE, commuter buses, the Mt. Vernon Trail and walkability to Reagan National Airport.

In other words, said the insider, the streetcar might have been icing on the cake, but it is unlikely to have moved the needle much on Amazon’s decision. Plus, it is possible that Arlington would have had to contend with some of the streetcar problems currently being experienced by D.C.

Amazon is expected to make its decision later this year. Arlington and Northern Virginia, one insider speculated, is likely to at least be among the top five contenders, and at least one betting market agrees, giving the region the highest odds among the company’s top 20.