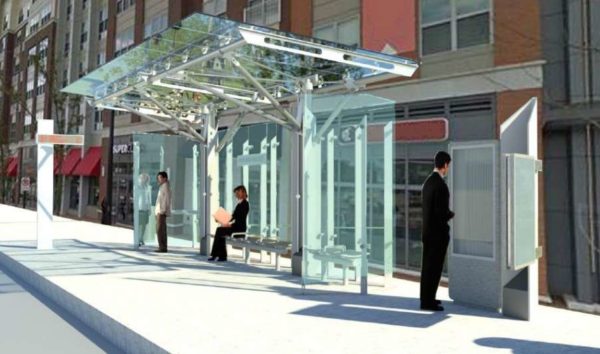 The new “Premium Transit Network” on Columbia Pike is being greeted with cautious optimism by some community members after years of discussion and delays.

But some raised questions about what will mark the new bus system as “premium,” considering it will not run in dedicated lanes due to the layout of Columbia Pike and will have a fleet of standard buses, at least for now.

The mood appears to be more positive than previously, when a group of civic association leaders derided the service for a lack of ambition in a letter last year.

“A bus is a bus,” said Ric Birch, president of the Arlington Mill Civic Association, one of several along the Pike. “You can dress it up, you can paint it a different color, use different fabric on the seats, it’s a bus. I’m not sure what the real drive is for a premium bus.”

Staff explained at a work session about the network last month that the standard buses are being used for cost reasons, as electric vehicles or ones powered by alternative fuels would be too expensive at this stage.

County Board vice chair Katie Cristol, a Pike resident, said that most important for the new service beyond the buses themselves will be the frequency, which she said she hopes to see at six-minute intervals for at least a large portion of the day.

Residents did give staff credit for looking at ways to keep costs down when constructing the 23 “premium transit stations” along the Pike. The successor to the nixed $1 million “Super Stop,” the new stations will be factory assembled to save money, and include features like electronic arrival boards and the option to pay a fare before getting on the bus.

However, some questioned the need for the technology in the bus stops, given the proliferation of smartphones and bus tracking apps.

“Adopting all the technology, I’m a little ambivalent about it,” said Maria “Pete” Durgan, president of the Penrose Neighborhood Association. “I know they put a lot of effort in coming up with a design and they want it to be distinctive but that’s a lot of money for something that doesn’t have to be quite so elaborate.”

“I don’t know that they’re making that same mistake there [with the $1 million bus stop],” said Birch. “The county learned to watch the price on it. But I do think it’s tying a bow on it and calling it something that it already is. It’s a bus stop. They don’t really shield you from the elements that well, and I don’t understand all the need for all the electronic connectivity in the bus stops.”

With the new network set to begin operations next summer, Cristol said she hoped it would help spark more economic development and revitalization along the Pike, as businesses look to capitalize on more regular service. Cecilia Cassidy, executive director of the Columbia Pike Revitalization Organization, did not respond to requests for comment.

But Birch said he would like to go further, and see long-term planning for Columbia Pike include a long-range goal of an elevated light rail system, as well as maintaining good bus service. Durgan said plenty of people were “totally bummed” when the streetcar project was cancelled in 2014, as it would have been something different for the Pike.

“You’ve got to get the transit out of the lanes of Columbia Pike,” Birch said. “[In] today’s political climate, I don’t think it’s likely, but it’s a long-range plan that even if the county were to start today, we’re talking 15 years. I think someone needs to be courageous and start doing that.”