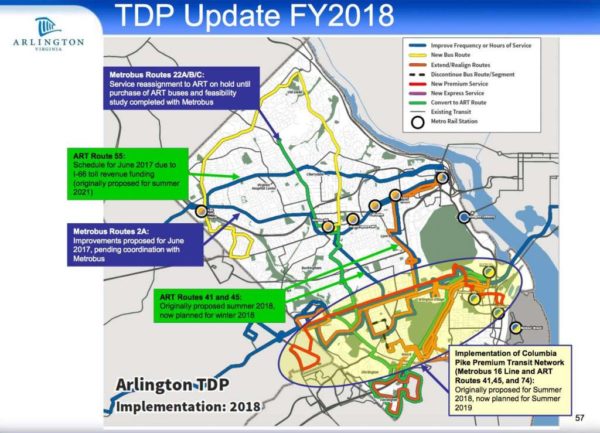 (Updated at 11:50 a.m.) Those who live and work along Columbia Pike will have to wait another year for the implementation of a “Premium Transit Network” along the corridor.

ARLnow.com has learned that the plan for enhanced bus service along the Pike has been pushed back from 2018 to 2019 due to “WMATA’s focus on SafeTrack and core operations.”

Arlington’s Dept. of Environmental Services issued the following statement on the delay.

Originally proposed for summer 2018, implementation of the Columbia Pike Premium Transit Network is now planned for summer 2019. Much of the new service for this network depends on Metrobus, but Metrobus service improvements have been hampered by Metro’s SafeTrack program and the need for Metrobus to focus efforts on moving passengers around rail disruptions. The County is still working to improve local ART service on the original schedule, and we’ve started the purchase process for new buses needed for future service improvements.

The Premium Transit Network was criticized as not ambitious enough when it was approved last year, especially compared to the Columbia Pike streetcar plan it essentially replaced. County staff was directed to consider other enhancements to transit along the corridor to supplement it.

The streetcar project was cancelled in 2014. At the time, Arlington County Board member and streetcar critic Libby Garvey promised a transit replacement that “will do everything the streetcar could and more.”

The transit network is intended be “fast, frequent, reliable and easy to use, with features including simplified routes, increased weekday and weekend service, and a new one-seat bus ride from Skyline to Pentagon City-Crystal City,” according to a county press release last year. “In addition to new service, the Premium Transit Network includes new transit stations along Columbia Pike that will provide near-level boarding, longer platforms, real-time bus arrival information and off-vehicle fare collection.”

Although the transit network implementation has been delayed, Arlington County and WMATA have already implemented a number of planned enhancements to bus service along Columbia Pike and elsewhere in Arlington, according to slides from a Dept. of Environmental Services budget presentation that were posted online.