A resident says he has video of the person responsible for a vehicle vandalism spree in the Rosslyn area.

Last week someone damaged more than a half dozen vehicles, primarily along N. Colonial Court and N. Colonial Terrace, a small residential neighborhood in north Rosslyn. Cars were keyed and tires were slashed, according to police.

Douglas Keith, a N. Colonial Court resident, obtained home surveillance footage of the man he says is the suspect from another resident. The footage shows a man wearing a backpack going up and down the street, sometimes stopping at cars and ducking down, allegedly to scratch the doors and flatten the tires.

The suspect, according to Keith, is a white male, wearing a black backpack, cargo shorts and black shoes. He further described him as a young adult between 5’6″ and 6′ in height.

Keith created a map to document each vandalism location, below. Thus far police have not announced any arrests in the case. 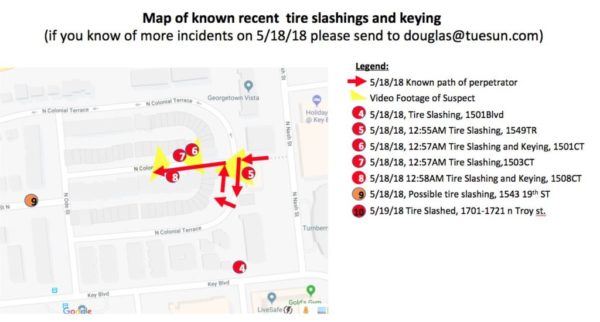 END_OF_DOCUMENT_TOKEN_TO_BE_REPLACED

More Stories
Crime Report: Mob Attacks Victim Who Was Taking Out the TrashThe National Capital Bank of Washington is Now Open in Arlington