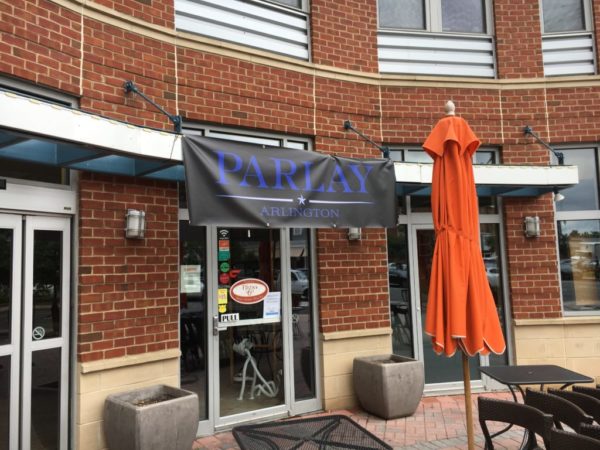 (Updated at 2 p.m.) A former D.C.-based sports bar is temporarily setting up shop in the space once occupied by Bistro 360 in Rosslyn.

Parlay Sports Bar and Lounge has set up a “pop-up” bar at the location at 1800 Wilson Blvd., according to one-time Bistro 360 owner Art Hauptman. He told ARLnow that the temporary takeover is set to last through the end of this week, though he said it could become a more long-term set-up.

Parlay was once located near Dupont Circle, before shutting down in April. The bar’s management posted on Facebook that it would be “doing events throughout the summer at various places” as it searches for a permanent home in D.C., and a Parlay banner is now draped over Bistro 360’s old signs.

“We will have game 6 on tonight so swing by and grab some wings #ParlayVA,” said one recent Facebook post, encouraging patrons to visit the pop-up. “Just look for the group that seems like they’re not from Arlington.”

Parlay’s owner did not immediately respond to a request for comment on his plans.

Bistro 360 had operated out of the space since the fall of 2014, but Hauptman said he decided to shutter the restaurant last week after receiving some lucrative offers for the space and losing his longtime chef and general manager. He’s since consolidated some of the restaurant’s wine and food options at the other Arlington eatery he owns: Cassatt’s Kiwi Café and Gallery, at the Lee Heights Shops off Lee Highway.