Arlington County is now hoping to kick off construction work on an overhaul of Ballston’s Mosaic Park early next year, following years of delays prompted in part by cost overruns.

County officials are planning to finish renovations at the park, located at 538 N. Pollard Street just behind the Gold’s Gym parking lot, by the end of 2019. Planners unveiled an updated timeline for the park’s renovations at a community meeting last Wednesday (May 30), along with detailed designs for new features like a playground, plaza and athletic courts.

The county’s eyed upgrades at the park back in 2008, and initially hoped that construction could begin in 2013. But planning work stretched on for years, particularly after its estimated construction costs overran the project’s budget. 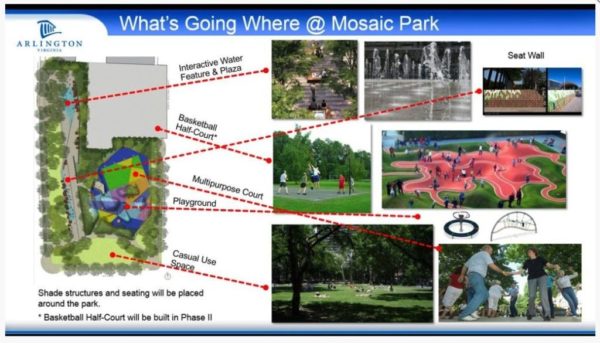 That forced the county to re-tool the project slightly to bring costs down, in part by eliminating some planned solar panels at the site that would’ve powered the park’s lighting and reducing the number of trees and plants to be installed around the park.

The Shooshan Company, which owns some nearby developments, agreed to fund the first phase of the $6.6 million project. The county is also hoping to add a basketball half-court to the site, but that work will come in a second phase of the project.

The county plans to award a construction contract next spring, and start work soon afterward. Officials hope to wrap things up by winter 2019.