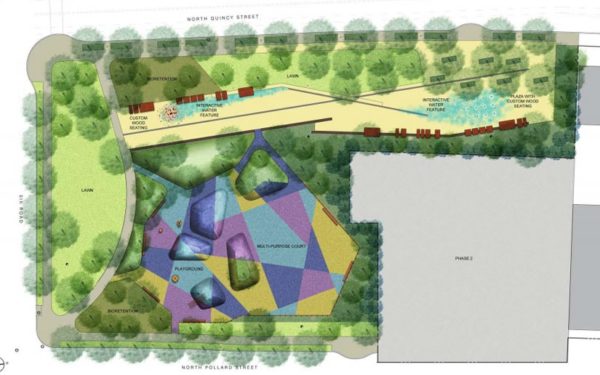 The latest conceptual design plan for major improvements to Mosaic Park (544 N. Pollard Street), near Ballston, includes interactive water features, a playground, a multi-use court and a small lawn for play and picnicking.

The plan, from noted design studio Oculus, was revealed at a community meeting last week.

In addition to the water jets and playground equipment, the park will also have green power features — currently slated as an array of solar panels designed to generate the 1.2 kilowatts necessary to power the park while at the same time providing some desirable shade. Additionally, there will be “wooden platform seating” near the water features — similar to the seating along New York City’s High Line.

The Shooshan Company, which is behind the nearby and still-under-construction Founders Square development, will be footing the $6.6 million bill for the improvements, per an agreement with the County Board.

County planners say they’re not sure when exactly the park will be built, but they’re planning on construction beginning at some point in 2013. A second phase of the project, which is expected to include a basketball court and additional green space, has been planned, but depends on the county’s ability to obtain land from a private property owner.