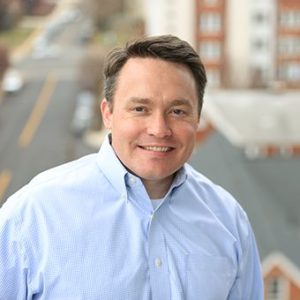 Matt de Ferranti has won the Democratic primary for Arlington County Board and will face incumbent John Vihstadt in the November general election.

De Ferranti captured about 61 percent of the vote, to 39 percent for Chanda Choun, a relative newcomer to civic life in Arlington.

A lawyer and advocate for Native American education, de Ferranti has sat on a variety of commissions and volunteered for local Democrats since moving to Arlington five years ago.

Between the Democratic County Board primary and the three-way Republican U.S. Senate primary, in which Corey Stewart emerged victorious, overall voter turnout in Arlington was light — just over 10 percent.

The Arlington County Democratic Committee congratulated de Ferranti, calling him a “terrific addition to this solutions-oriented ticket.” More from an ACDC press release:

Now that the voters have chosen the Democratic nominee for the County Board seat, Arlington Democrats are ready to work hard to elect the entire Democratic ticket, which also includes Tim Kaine for U.S. Senate, Don Beyer for the U.S. House of Representatives, and Barbara Kanninen for the Arlington School Board. These progressive leaders have delivered for Arlington, and they deserve reelection. Matt de Ferranti is a terrific addition to this solutions-oriented ticket.

Jill Caiazzo, Chair of the Arlington County Democratic Committee, expressed, “We thank both Matt de Ferranti and Chanda Choun for conducting a positive, issue-oriented and energetic primary. We are excited to have Matt on the ballot because he will move Arlington forward by maintaining our excellent schools, addressing housing affordability, improving our transportation system, and stimulating a strong economy for all.”

Caiazzo further noted: “Flipping Virginia Blue this year begins in our own backyard with this important County Board seat.” Since 15 elected seats were flipped blue in Virginia last year, Democrats have succeeded in expanding Medicare for 400,000 Virginians, even without a majority in either the House of Delegates or the Senate. Flipping the County Board seat blue will help Arlington make even more progress on issues that make a difference for all residents.