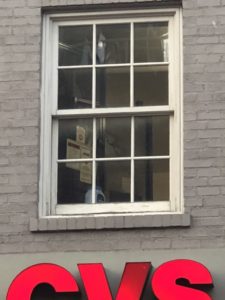 Last Friday, as we eagerly awaited the arrival of the Washington Capitals and the Stanley Cup in Clarendon, a few ARLnow staffers had some time to kill.

As the minutes ticked by and Lord Stanley’s cup was still somewhere between Dulles and Don Tito’s, we looked up at the CVS Pharmacy across the street and realized something: there was a second floor. It might seem obvious to others, but we hadn’t noticed the windows there before.

What exactly was up there, we wondered?

Before Slacking the intern to request a full investigation the following week, we saw two people peering out the window at the growing crowd below.

The clothes they were wearing were a pretty good clue as to what’s up there — but that’s not going to stop us from making the most of this mystery and posting it in the form of a morning poll.

So we put it to you, our readers: what do you imagine is above the Clarendon CVS?