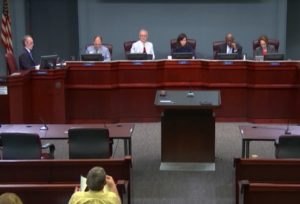 Arlington officials are set to move ahead with changes to the county’s real estate tax relief program, a policy designed to help older Arlingtonians stay in their homes amid rising property values.

The program is currently open to homeowners age 65 or older and people with disabilities, with an annual income of up to $99,472 and household assets — excluding the home itself — up to $340,000.

But the County Board could agree to advertise changes today (Tuesday) that would bump up the total asset limit and change how the county awards tax exemptions by income level.

“This is really for folks who tend to be on limited or restricted income, where their homes have appreciated in value to the point where it makes it hard to stay in that home,” County Board Chair Katie Cristol told ARLnow. “This is not a sweeping overhaul of the program… it’s about efficacy, making sure the program reaches the people who qualify for it.”

The proposed policy changes would increase the asset limit to $400,000 to account for rising home values, and allow the county to adjust that amount annually as property values and the area’s median income level changes.

The Board is also considering allowing people apply for an exemption from 75 percent of their total tax bill, based on their income level — previously, the county only offered a full exemption, relief from half of the tax bill or relief from a quarter of the bill.

For the very top earners allowed to apply for tax relief — households making anywhere from $80,000 to $99,472 per year — the policy change would restrict them to only applying for a deferral from the taxes, not a full exemption. Previously, the policy allowed households making that much to apply for 25 percent or 50 percent exemption, but only if at least four people lived in the home in question.

County staff estimate that about 90 of the 915 households who apply for the program could lose their exemptions under that change, but they expect many would still receive a deferral instead.

Cristol notes that this proposal is the result of roughly two years of effort by a working group convened by the Board to study the issue. She doesn’t expect that the changes will result in some sort of major fiscal impact to the county — staff wrote in a Board report that Arlington will lose about $154,000 in annual revenue under these proposed changes — but merely better target the program at reaching people who need it.

“The goal is to tighten it and make it more effective as a program, not lower obstacles for participation,” Cristol said. “This is not a large scale policy change.”

According to a report prepared by county staff for the Board, 76 percent of households who applied for the program last year had an annual income of $60,000 or less, and total assets of $100,000 or less.

Should the Board approve the request to advertise item on its agenda today, the county would hold a public hearing at the Board’s July 14 meeting.