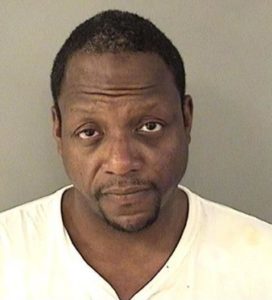 A 41-year-old man is facing a litany of charges after allegedly leading a police officer on a wild chase through part of Rosslyn.

The incident happened last Thursday around 6:30 p.m. Police say the man, Lamont Witherspoon, was spotted by an officer and identified as the suspect in a theft that had just occurred.

Witherspoon ran from the officer, dodged a taser, took off running again, and engaged in a physical struggle with the officer before finally being taken into custody, according to an Arlington County Police crime report.

The full crime report item is below.

ASSAULT ON LAW ENFORCEMENT, 2018-07050205, 1100 block of Wilson Boulevard. At approximately 6:32 p.m. on July 5, police were dispatched to the report of a larceny in progress. An arriving officer identified the suspect, who was allegedly in possession of stolen goods that were visible in his backpack, based upon a lookout and attempted to stop the suspect. The suspect ignored the officer’s commands and fled the area on foot. A brief foot pursuit ensued and the suspect eventually stopped running. The officer issued lawful commands to the suspect, to which he did not comply and continued to challenge the officer. The officer then attempted to deploy his taser unsuccessfully, however, the suspect complied and got on one knee on the ground. When the officer attempted to handcuff him, the suspect continued to struggle with the officer, knocked the handcuffs away and fled on foot again. A second foot pursuit ensued and the officer was able to take the suspect to the ground. The suspect resisted the officer’s attempts to control him and repeatedly pulled the officer’s hand away from his radio and interfered with his microphone, preventing him from communicating his location to dispatch. The suspect continued to be combative, attempting to strike the officer with a closed fist multiple times. Despite the suspect grabbing the officer’s hand as he attempted to use his O.C. spray, the officer was able to successfully deploy the spray, preventing the suspect from further resisting arrest. With the assistance of an additional arriving officer, the suspect was then taken into custody. The officer sustained minor injuries and was transported to an area hospital for evaluation. Lamont Witherspoon, 41, of No Fixed Address, was arrested and charged with Petit Larceny: 3+ Offense, Possession of Burglarous Tools, Assault on Law Enforcement, Attempting to Disarm a Law Enforcement Officer of a Chemical or Impact Weapon, Obstruction of Justice (x2), Preventing an Emergency Call, and served with an outstanding warrant for Grand Larceny. He was held on no bond.