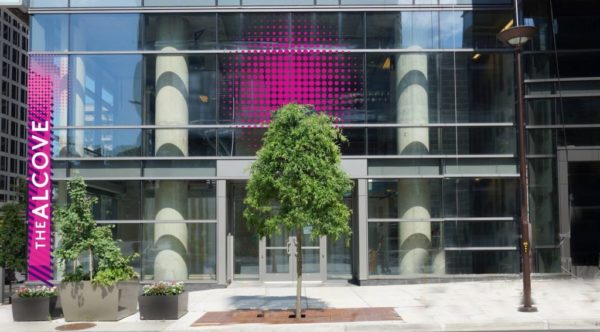 (Updated July 25 at 3:55 p.m.) A new pop-up store is setting up shop in Rosslyn’s Central Place Plaza next month.

The Rosslyn Business Improvement District is preparing to open “The Alcove” in a roughly 5,000-square-foot space at the corner of 19th Street N. and N. Moore Street, next to Nando’s Peri-Peri. The store is set to open to the public on Aug. 8, and remain in place through the end of September.

The BID says the store, which will be the first brick and mortar pop-up the group has ever set up, will primarily be anchored by Turning the Page, a D.C. nonprofit selling used books, CDs and DVDs. Proceeds will benefit students in public schools.

The store will also offer “artisan-made products, food and beverage items, apparel, art and even bridal accessories,” according to the BID, and plans to court additional vendors, like local artists selling their wares on Etsy.

The BID plans to hold interactive events in the store, including “musical performances, fitness classes, DIY workshops and readings by well-known authors.” The Arlington County Public Library is also organizing more than 20 events for the store, including author talks and a “maker series” that allows both adults and kids to explore art, books and crafts.

The shop will be open from 11 a.m to 8 p.m., Tuesday through Saturday.