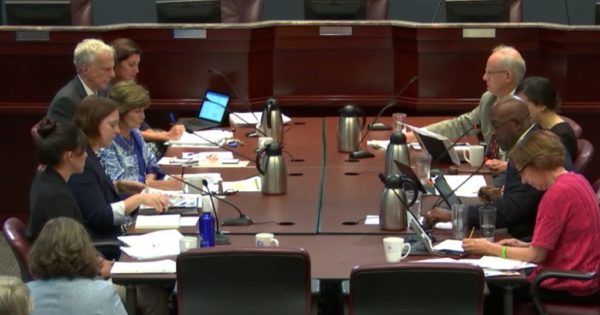 Arlington officials are moving closer to setting up a new financial assistance program to help families afford childcare, with overhauls to zoning and parking requirements for daycare facilities possible before the year is out.

The County Board signed off yesterday (Tuesday) on a final version of a “Childcare Action Plan” it’s been eyeing since late last year, setting the stage for leaders to address the affordability and availability of childcare in Arlington following years of debate.

In the near term, the county will work with local businesses and nonprofits to set up a program to defray childcare costs for families who don’t qualify for state subsidies, similar to existing efforts in Alexandria and D.C. Staff also plan to study the county’s childcare needs and shortcomings in more detail, building on work they’ve done over the last year or so, and make the county’s online resources for childcare providers a bit more streamlined.

By December, the Board plans to rewrite some of its zoning ordinances to make it a bit easier for daycare centers to open and operate in the county, with the goal of bringing costs for parents down in the process. That same month, the Board will propose changes to the county’s childcare codes, with a vote on the edits soon afterward.

Leaders haven’t quite finalized what all of those changes will look like, with community engagement and public hearings to discuss the specifics set for the coming months, but they’re broadly aiming to give parents more affordable options for daycare around Arlington.

“We’ve come a far way, but we’ve got a long way to go,” said Board member Libby Garvey.

Board Vice Chair Christian Dorsey pointed out that Arlington parents foot the highest average annual bill for childcare for an infant and a 4-year-old out of any locality in the region. The county’s average cost of $42,705 per year, compared to $40,521 in D.C. and $37,787 in Alexandria per staff’s findings, left Dorsey “gobsmacked” and eager to see what the Board could do to bring that figure down.

“I can’t imagine our rents are higher than they are in D.C.,” Dorsey said. “The District has just as much supply-demand pressure, yet we’re more expensive… I’m not interested in Arlington exceptionalism when it comes to this.”

One contributing factor could be the county’s parking requirements for daycare facilities. Deborah Warren, the deputy director of the county’s Department of Human Services, noted that Arlington currently requires providers to have one parking space for each employee, in addition to space for pickups and drop offs.

The Board could tweak that requirement to make it easier for more facilities to open in the county’s densest neighborhoods, or even let smaller, family daycare providers avoid the lengthy process of applying for a special use permit before opening their doors.

“If it takes less time, there’s less of a process to go through, hopefully we can increase the number that’s out there,” said Kimberly Vacca, an associate planner with the Department of Community Planning, Housing and Development.

With roughly 13,435 children under the age of 5 in the county and 6,894 spaces in licensed daycares, as of 2015, county leaders recognize they have an urgent need to somehow attract more providers to the area.

Dorsey urged the Board not to lose sight of the county’s focus on using its regulations to enforce high standards at all of its daycare facilities, yet the entire Board expressed a desire to see some of those requirements somehow loosened by the time this process wraps up.