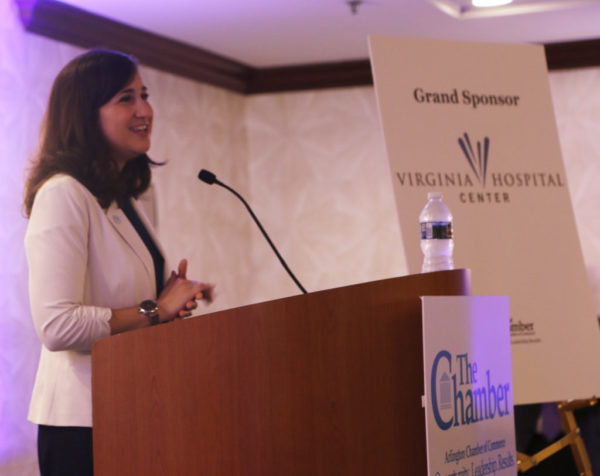 Arlington officials plan to unveil their long-awaited overhaul of the county’s childcare policies next month.

County Board Chair Katie Cristol announced those plans her first “State of the County” address today (Thursday) while speaking to the Arlington Chamber of Commerce in Crystal City. The overhaul is a substantial step forward in the debate over how to improve the availability and affordability of daycare in the county.

While Cristol said she was broadly “optimistic” about the county’s future, she stressed that the Board needs to take action to bring down the cost of childcare and ease the financial burden on working families. County leaders have been examining a “draft action plan” to tackle the issue since December, and Cristol says the Board plans to unveil a final product and debate it in full at a July 24 work session.

“For many families, child care can cost more than rent,” Cristol said. “In just a few weeks time, the Board will consider a detailed plan to address this… including a new set of land-use strategies, public-private partnerships and more.”

She noted that county staff and a host of community partners have been studying the issue since early last year, and will finally be able to present a path forward in some “granularity” next month.

Some items will be able to put into motion immediately, while others will require more Board debate, particularly if they involve zoning changes.

Cristol also stressed the childcare plan would be just one of the Board’s priorities as it moves into the back half of 2018. Following the “Big Idea Roundtables” the county convened to spark conversations among county residents, Cristol said she’s newly hopeful that the Board will be able to revisit its zoning policies to increase Arlington’s supply of market rate affordable housing.

Specifically, she’s interested in tackling the problem of the county’s “missing middle,” or homes available for county residents who might make too much money to qualify for dedicated affordable housing but still can’t afford detached single-family homes or high-priced luxury condos.

Cristol is hoping to find new ways to encourage the development of duplexes, moderately-priced townhouses or even “accessory” homes small enough to fit on another single-family home’s property. The county has already loosened its rules for such construction, known as “accessory dwelling units,” but she believes there’s more work still to do.

“We cannot lose sight of affordability as the fundamental challenge of Arlington’s future,” Cristol said.

She expects that the “overdue” kickoff of planning along the Lee Highway corridor, which the Board found new funding for this year and will start in earnest in the coming months, will have some role to play in that conversation.

Cristol would acknowledge, however, that the specter of Amazon’s arrival in Arlington hovers over any discussion of affordable housing or any other pressing issue in the county.

She declined to “break any news” on that front, but would say that she felt the county’s pursuit of the tech giant’s HQ2 “will make the county stronger.”

“Whatever choice Amazon makes on HQ2, it means the national spotlight has found our county,” Cristol said.

END_OF_DOCUMENT_TOKEN_TO_BE_REPLACED

More Stories
Virginia Wine Festival Coming to Rosslyn This FallHealthy Paws: Ensuring a Safe Independence Day for the Fur-Kids of the Family