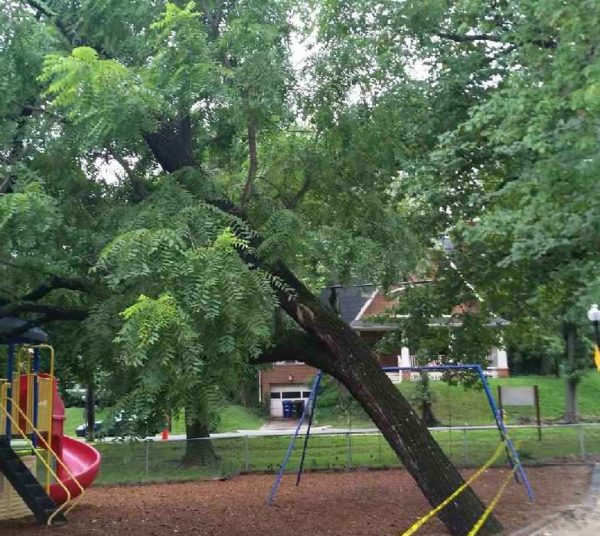 A perilously perched tree has prompted the temporary closure of a playground near East Falls Church.

The severe rain storms of the last few days has caused a “tree-mergency” in Madison Manor Park (6225 12th Street N.).

Susan Kalish, a spokeswoman for the county’s Department of Parks and Recreation, says the rain managed to so thoroughly soak the ground at the park that the tree eventually tipped over. She says workers will be removing it “first thing” tomorrow morning (Thursday).

“After they have finished, parks crew will clean up any mess and refasten a section of fence that has been removed,” Kalish wrote in an email. “None of the play equipment has been damaged. One section of the perimeter timber has been dislodged by the tree’s roots and will have to be repaired once the tree is removed.”

Kalish said the county hopes to reopen the playground by “close of business tomorrow,” or Friday morning at the latest.

Parks and recreation workers plan to announce exactly when it will re-open on the department’s Twitter account.