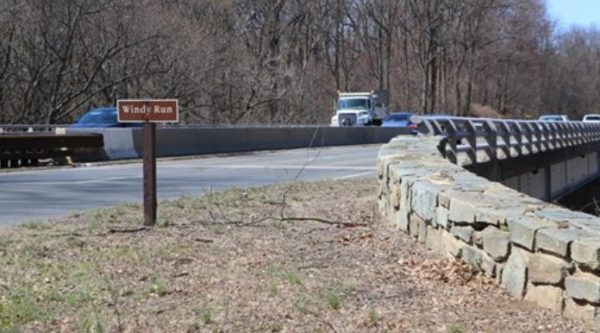 The National Park Service is warning drivers about severe traffic backups on the GW Parkway starting today (Monday) and running through the fall, as rehab work on the Windy Run Bridge gets going.

Workers have spent the last few weeks removing guard rails and center curbs, as well as doing some paving work, in order to prepare for work on the bridge, located in northeast Arlington near the Woodmont and Riverwood neighborhoods.

Starting today, the NPS plans to reduce the parkway from four lanes down to three, and expects to:

The NPS plans to always keep one lane open in each direction, reversing the third lane as needed to match the direction of traffic in the morning and evening rush hours on weekdays.

“Drivers should expect a lower speed limit, narrower lanes and a substantial police presence until this fall,” park superintendent Alexcy Romero wrote in a statement.”We need to shift traffic so that workers can safely rehabilitate the road surface of Windy Run Bridge.”

The bridge was built back in 1959, and the NPS plans to “restore the bridge deck by removing and replacing its top layer” in order to extend its life.

While work on Windy Run should wrap up before the year is out, the NPS also warns that “all of the bridges and roadway on the northern part of [the parkway] will also soon need maintenance work.” The NPS recently closed a public comment period on some of that planned work, and expects to release more details in the coming months.

Photo via the National Park Service